Having a variety of collecting interests helps keep things fresh.  While I love collecting certified autos of my favorite Pirates, occasional lulls in interest are bound to happen.  Topps seems to think that Pirate collectors want a Starling Marte and Gregory Polanco auto in every set. While I love collecting both players, I think I can speak for most of us by saying we don't.

When the established players become boring I usually turn to rookies.  While I love collecting rookie cards the price tag can be prohibitive .  For the most part that means I'll add a few right off the bat and then hold off until they get a little closer to seeing an MLB roster.  Sure you might miss out on accumulating cards of the next Mike Trout, but odds are you will have plenty of time to go back and get some of the cards you missed for a reasonable amount.

While it may not be evident on my blog I do like chasing base cards and obscure base parallels.
Lately I've been on a kick trying to find obscure base cards from the mid 2000's.  I was an active collector during this time, but the shear amount of sets available made it impossible to keep up.

A few weeks back Brian from Collecting Cutch sent me a great card that fits my current collecting mood. 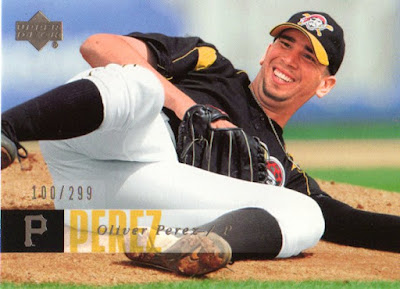 I miss Upper Deck.  Sure they had their flaws, but cards like this remind me how good some of their base sets were.

Oliver Perez was quite the character for the Pirates. This card sums up his personality during his Pirate tenure perfectly.  He faded out as starter for the Pirates about as quick as he stormed on the scene.  Thankfully he revitalized his career as a Loogy and pitched for the Nats this season.

Does your collecting mood change a ton during the year like mine?

Thanks for reading.
Posted by BobWalkthePlank at 8:07 PM