Maybe Even More Obscure than a Middle Reliever Card

Nothing excites me more in terms of collecting than seeing an obscure player get a card.  What can possibly add to the excitement?  How about an offensive lineman card!!!! 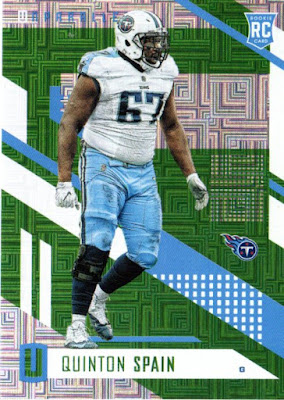 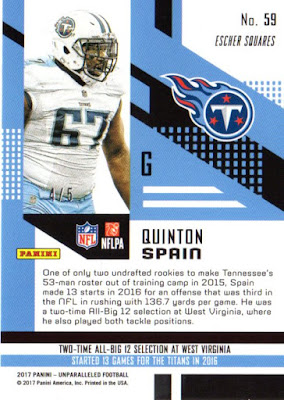 Quinton Spain is a former WVU lineman that went undrafted in 2015.  After signing with the Titans he ended up making the team.  In 2016 he earned a starting roll and besides some occasional injury concerns hasn't looked back.

Obviously being undrafted and an offensive lineman doesn't lend yourself to much hobby love.  So this really cool looking diecut  from 2017 Panini Unparalleled is considered a rookie and his first major release.

I'm actually surprised I even found this card.  About once a year I'll throw some names in eBay of some obscure WVU guys just to check and see if they had a card. After Spain didn't receive a card his first two seasons I actually wrote him off.  Somehow I came across this new set and the rest is history.

Some of you may have seen Spain before if you watched the Stanley Cup playoffs last year.  Many of the Titans were in attendance and Spain often stole the show with his shirtless shenanigans. 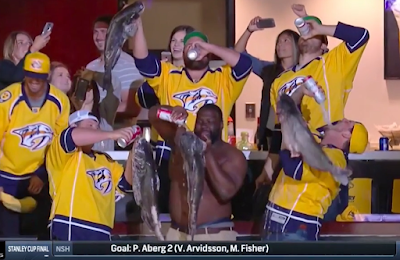 Posted by BobWalkthePlank at 7:00 PM