P-town Tom may have just completed the fastest turnaround for a trade in blogging history.  Last week I hit him with a Vogelbach auto and about 2 minutes later I had a return package. I thought it could have been a coincidence, but he reused the note I had sent him.  Well done Tom! 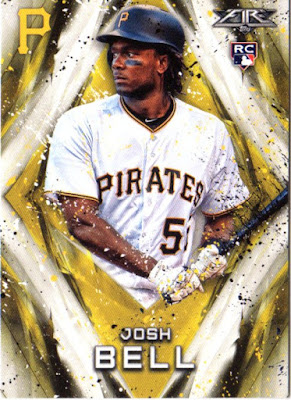 What made this trade even weirder is that I've been talking about Topps Fire on here with a few people saying that I've been interested in buying a blaster at Target.  Well Tom (who could possibly be some type of wizard) read my mind and sent me the most desirable Pirate.

While hard to give a review based on just one card, I will give Topps credit for doing something different. Being a fan of 90's cardboard I found this card reminiscent of the crazy inserts of the time. My buddy GCRL told me he bought some and the collation was poor so that may prevent me from going out and spending money on it. Looks like I'll just rely on the generosity of some of my trading buddies.

The main event in the magical trade package was this Topps Super Luke Walker.  I recently mentioned this card a few months back in that it seems like it should have a good back story.  Either way it is absolute great card.  What are you looking at Luke?!!!

Thank you for the great cards Tom.
Posted by BobWalkthePlank at 5:17 PM