Back towards the end of September I hit my last Pirate game of the season. In turned out to be a good game as Andrew McCutchen had a night to remember. 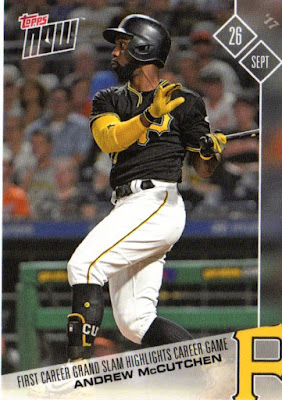 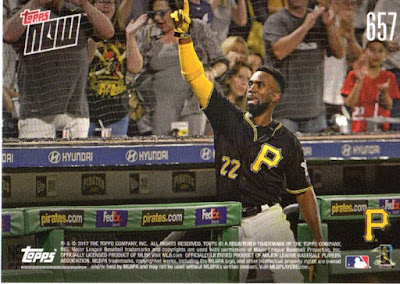 Believe it or not McCutchen had gone his entire career without a Grand Slam.  It had gone so long that it was mentioned on a regular basis during broadcasts.  Thankfully he was able to cross that off the career milestone list. The night was far from over as Cutch would also hit a three run homer and have 8 RBI's for the night. He received a lot of love from the fans and took multiple curtain calls.

I'm thankful that Topps added a unique card back featuring one of the curtain calls. That has been a nice addition to the NOW cards this season and I hope it continues with next years installment.

Hope everyone is enjoying the World Series.  How about that crazy quick game last night? I don't think Rich Hill has that kind of efficiency in him so it will be up to Justin Verlander to keep things moving at a reasonable pace.

Thanks for reading.
Posted by BobWalkthePlank at 8:28 PM