I've only been on Twitter for a little over a year so I'm still navigating and learning the cardboard scene.  When I first started I would follow just about anyone who "specialized" in selling cards. I quickly learned that these sellers would either be asking too much money or focus on mega high end. I've been purging most of these sellers from my follow list.

Thankfully my patience paid off with a seller named Cole's Cards.  Cole has a little bit of everything under the sun.  His prices are reasonable and you can even negotiate.  He posts a ton of cards over the course of the week and charges a flat rate shipping fee no matter how many you buy.

Last week I made my first set of purchases. 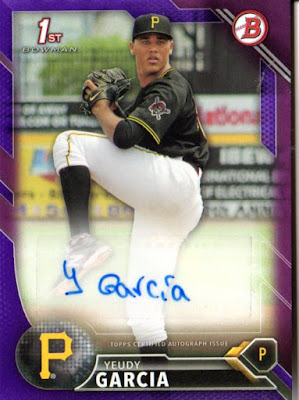 I'll grab just about any Bowman Pirate auto if the price is right.  I only paid a couple bucks for this Yeudy Garcia /250.  Garcia was the Pirates minor league pitcher of the year a couple years back and projects as a high end reliever if his offspeed pitches develop a little more. 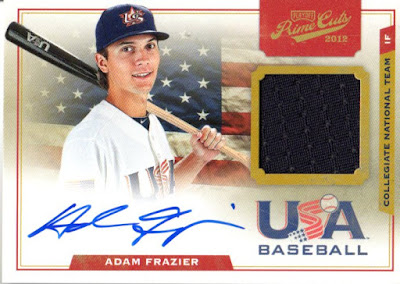 I was most excited about this Adam Frazier auto. Frazier wasn't a highly regarded prospect coming out of college so he lacks early autos.  While it hasn't been the easiest road for Frazier all he did was hit in the minors and worked his way up to Pittsburgh in 2016. He is finally getting some cardboard love in 2017 in which his cards sell surprisingly high.  If he can improve his defense he has a chance to be a really useful super utility type of player in the mold of Josh Harrison. 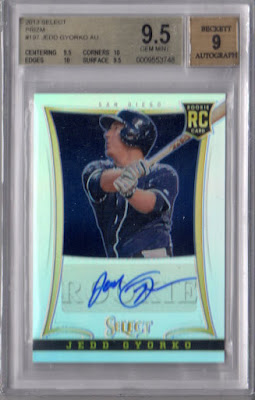 I don't actively shop for Jedd Gyorko, but I'll happily add any auto when the opportunity presents itself. Gotta support the WVU guys!

If you have Twitter I suggest giving Cole a follow. He gets two thumbs up from me!

Thanks for reading!
Posted by BobWalkthePlank at 10:22 PM