I Bought a Marlins Card

That title alone is enough to cut potential page views in half.  I probably should have centered something around Giancarlo Stanton and Shohei Ohtani for click bait! 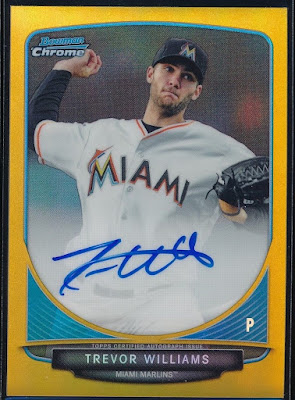 Trevor Williams path to the Pirates is one of the more interesting ones in recent memory.  Before the 2016 season, the Marlins lured two executives away from the Pirates front office. Apparently it is common practice to not let this happen in the same offseason so the Marlins compensated the Pirates by sending Trevor Williams.  At the time Williams wasn't seen as a huge prospect, but he was in the upper minor leagues and could start.

As luck would have it Williams would play himself into the rotation during the 2017 season and now is seen as a likely lock to be penciled in for next season.  Also, if you want a good follow on Twitter you check him out.  He is one of the few active players that makes me laugh.

The card itself was a nice bargain for a low numbered Chrome rookie.  It cost me around $8 shipped! Having that Marlins uniform is the MLB version of the Scarlet Letter.

Thanks for reading!
Posted by BobWalkthePlank at 6:11 PM