Kin Picks me Up

I'm seeing the finish line after a long stretch of extended work hours. That alone puts me in a better mood, but the generosity of some of my cardboard buddies has really put it over the top. This most recent installment is from fellow WVU alum Kin.  He also included a nice letter which was a cool touch. 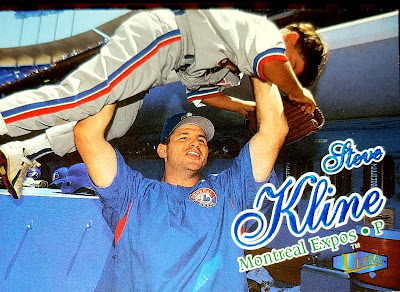 Steve Kline played his college ball at WVU and is probably best known for his tenure in St. Louis as a left handed reliever in the early 2000's. He is more famous in our community for this great Ultra card.  I actually have a Steve Kline story.  A bunch of my friends went to a Pirates/Cardinals game in Pittsburgh while I was in college.  We jokingly yelled Let's go Mountaineers to him and he came and signed a bunch of stuff for us and chatted for a minute.  Cool guy for sure. 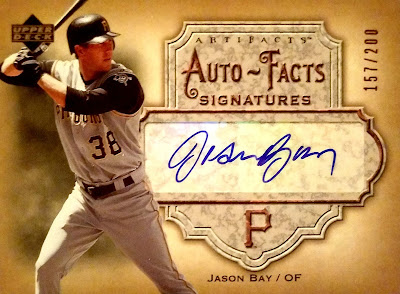 Again I apologize for the odd looking scans.  With my crazy long work schedule I haven't had much time to at least attempt to fix my main home desktop computer.  Lot's of phone pics and scanning apps. 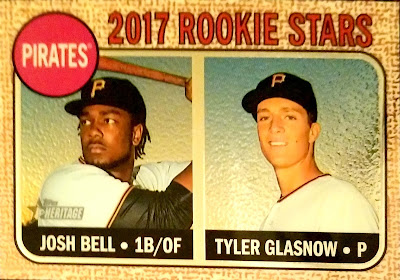 When this card first came out it was among the hottest Pirate releases of the year.  Both guys had considerable prospect pedigree so prices weren't exactly cheap.  Bell had a pretty good rookie year and looks to be a nice piece in the years to come.  Glasnow is more of an enigma.  The guy has dominated the AAA level, but has yet to show anything at the MLB level.  He is a tall guy (6"8) so according to scouts he has a hard time repeating his delivery, thus his command turns to shit. 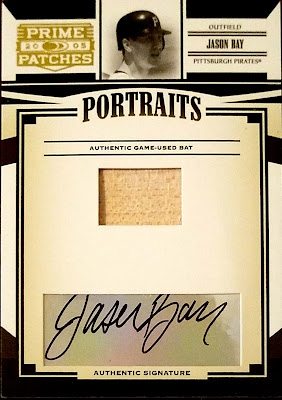 Prime Patches is one of those sets that when you think you have everything under the sun a new card pops up.  I bet there is something like 30 variations of Bay cards in the set.  I love all of them.  I have a sickness and Kin is an enabler. 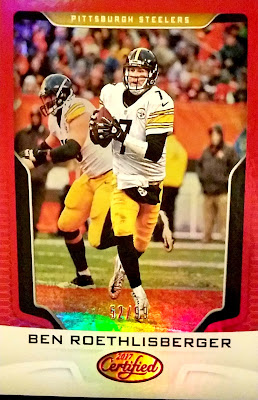 My NFL fandom dwindles some every year.  I enjoy watching the Steelers when time permits, but I really don't care if they win or lose.  Even after the controversial call in the Patriots game on Sunday I just kind of laughed and went on with my day.  With that being said I do enjoy watching videos of fans absolutely losing their shit when stuff like this happens.  That is always worth a laugh.

Collecting wise I still enjoy receiving as many Steelers cards as I can.  I like seeing the different football sets. 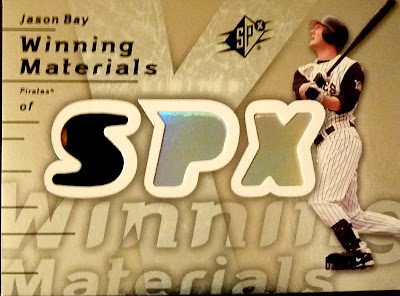 A touch of gold on the "S" makes this a two color patch! 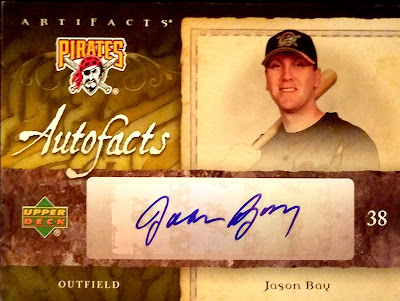 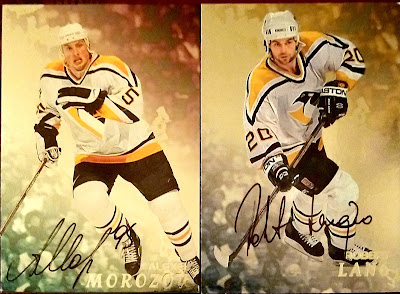 Morozov and Lang were both members of the Pens when I would take advantage of their student rush program.  Basically you paid $25 bucks and got the best available ticket.  Sometimes you could get lucky and get some really nice seats.  One time we had 8 people in our group thinking we would have to split up, but the Pens gave us box seats.

LOVE these autos!!!  The Lang especially as he had some crazy good years with the Pens. 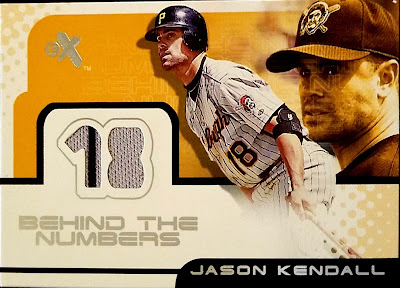 Jason Kendall and Brian Giles are often my only options when looking for Pirate hits in the late 90's early 2000's. EX seemed to fancy and unattainable when it came out.  Now my cardboard friends just send them to me out of the blue.  What a world! 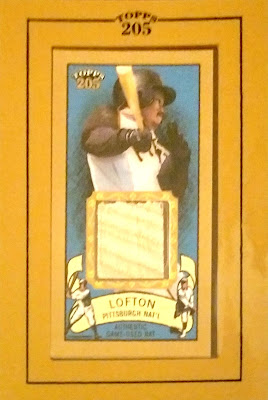 Here is a card right in my wheelhouse.  Just the other day I was showcasing a Sean Casey printing plate featuring him in the Pirates uniform.  I'm such a sucker for short termed Buccos.  Kenny Lofton played awesome during his half season as a Bucco.  He only has a few cards that document his stay.  This 205 relic is one of the best.

Some numbered cards of current Steelers including superstars Bell and Brown. 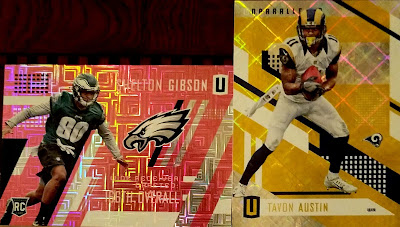 Nice that Kin sends me WVU cards being that he collects them himself.  I think I may be the benefactor of him narrowing his scope which I'm completely fine with. 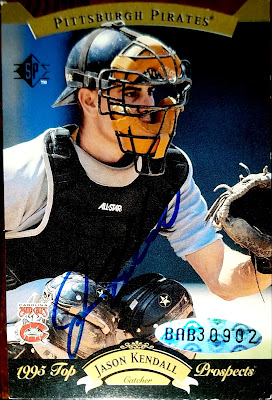 I'm not one of those people that think the old way of doing things is better than any recent version, but with auto cards it may be true.  Early autograph sets seemed to go with the less is more mantra which you don't see much in current auto sets.  Early sets like this SP auto, Donruss and Leaf were all top notch. 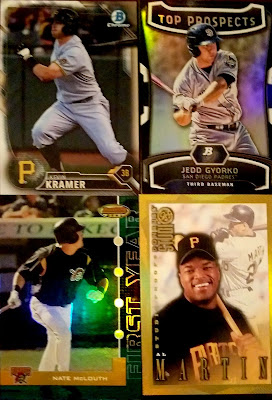 Kramer played in Morgantown as a Black Bear two seasons back and Gyorko is from Morgantown and a former Mountaineer. 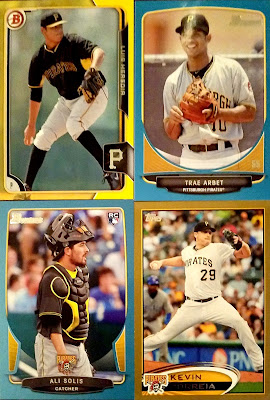 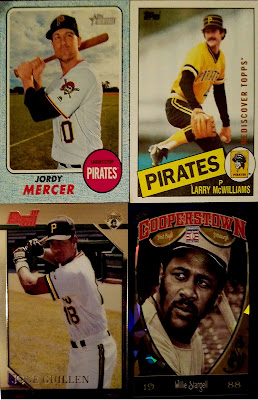 Man that Jose Guillen card was a must have back around his debut time for the Buccos.  He would go on to have a pretty nice career, but the Pirates called him up too early.  He would be up and down several times which most believe stunted his development.  My favorite thing about Guillen was his absolute cannon of an arm. 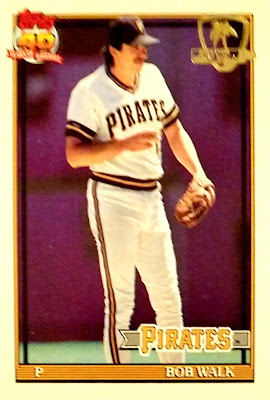 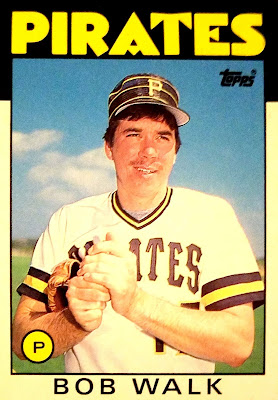 Kin comes in strong at the end with two great Bob Walk's.  Little known fact is that Bob Walk ended Desert Storm on his own.

Thanks for the nice surprise package Kin.  I'll need to think about how I'm going to hit you back.

Thanks for reading.
Posted by BobWalkthePlank at 7:24 PM