After striking out on almost everything eBay related in March and most of April, I've started to win some auctions. As I've said before, I really haven't been chasing much in 2015 so my focus has been on the early 2000's. This time around I was able to nab this card which is full of star power. 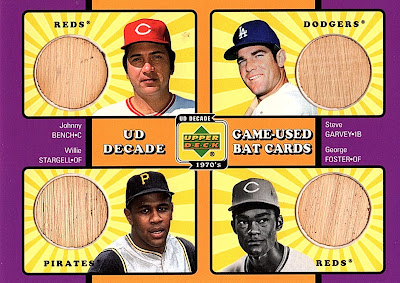 I rarely buy relic cards on eBay, but this one caught my attention. I have several of the single relics, but this is my first quad from this set. If I recall this set was more of a retail oriented set, but I may be messing that up with something else.

This card cost me $16.50 shipped which is a little on the steep side for a relic purchase, but according to the odds these fell about 1:400 packs. You would figure they could find a color photo of Foster instead of making it look like he played in 1890. Other than that this card has a nice vibrant look.

Hope everybody is enjoying some nice weather. 85 and sunny in my neck of the woods.

Posted by BobWalkthePlank at 8:38 PM