I'm not really a hypocrite, but maybe a product of poor timing. Yesterday I featured a quad relic with the caveat that I don't shop for relics. Guess what came in the mail today!

I really should keep a log and compare nights my daughter is not sleeping with eBay spending. In terms of auction wins this has been the most successful week this year. With that being said my daughter and wife were both sick so I was up all hours of the night. I would say a reasonable hypothesis is that if Matt's family is sick he has way too much time to look at eBay. The good thing is that total dollars spent was reasonable and that I only bought what I consider two higher end cards (more than $20). 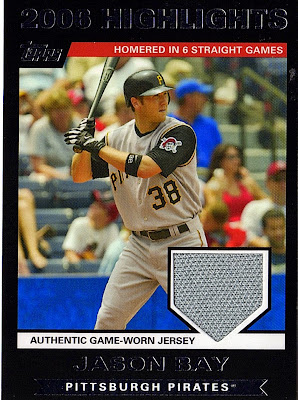 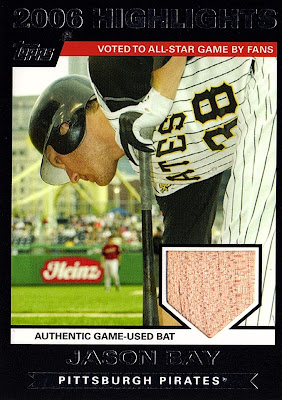 I tore up my stacks of Jason Bay cards thinking I had these, but I could not locate them. I'm sure they will pop, but for now we'll pretend these are new to my collection.

Jason Bay will forever hold a soft spot in my collecting heart. He was the first player that I could actively chase when I got a "real job." He was the first Pirate to get love in terms of autos and relics in just about every release. My collection reflects this a great deal as I have more cards of his then anybody else (McCutchen was gaining fast, but prices have made it hard to add).

2007 Series 1 Topps highlight relics had a nice checklist. Some players even had 2 variations like Bay. I tried finding if one is more rare than the other, but my half hearted attempt couldn't yield any odds. The main thing I remember about the 2007 set was the Jeter base card that had Mantle and George Bush airbrushed in.  This led to a lot of non collectors spending way too much on a Jeter base card.

Hope everybody has a nice weekend.

Posted by BobWalkthePlank at 8:43 PM