With all the recent trades I haven't had much time to show cards I've purchased the last few weeks. This is a new mini that I've added to my collection. 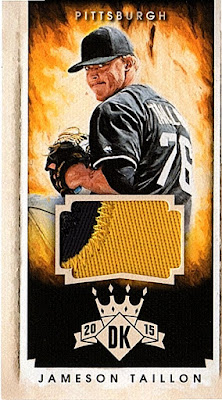 I rarely by jersey cards on eBay, but I will often pull the trigger on nice patches if the price is right. Normally I'm looking for some of the late 70's Pirates, but this popped up and caught my eye. It is a pretty big patch for the size of the card. Plus, I really like the new DK set.

Taillon is always one of my regular eBay searches as his cards are very affordable. He was the 2nd overall pick in the loaded 2010 draft. Obviously the Pirates thought a lot of him as some of the notable guys picked after were Manny Machado, Matt Harvey and Chris Sale.

After climbing the system it looked like Taillon would be making his debut at some point in 2013, but his arm gave out. Tommy John surgery caused him lose the entire 2013 season. While his rehab has reportedly been going great the Pirates are not rushing him. He may help the team in September, but 2015 is most likely the target.

Thanks for reading.
Posted by BobWalkthePlank at 3:42 PM