P-town Tom and I have put our foot to the pedal when it comes to swapping lately. It seems like every time I turn around I'm getting a cool pwe. Tom has found a treasure trove of Pirate autos as he has been feeding me new ones in every envelope. 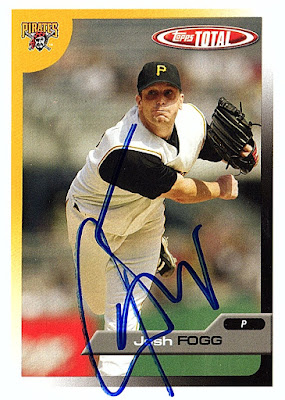 Fogg only had a couple of certified autos during his playing days so this is a welcomed addition to the collection. While Fogg was not a very successful pitcher during his playing days I do have fond memories of watching him play when I was at my peak of attending games. Looking back at his numbers you have to wonder how he was able to stay in the league for so many seasons. I guess durability and the ability to eat innings pays off when you are on bad teams. 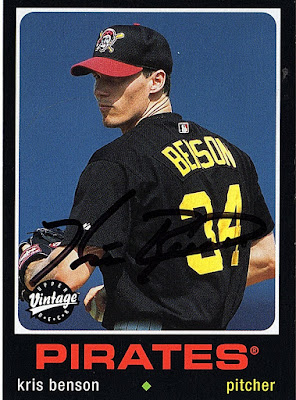 I talk about Benson a lot on here. Have to wonder what could have been if he stayed healthy. 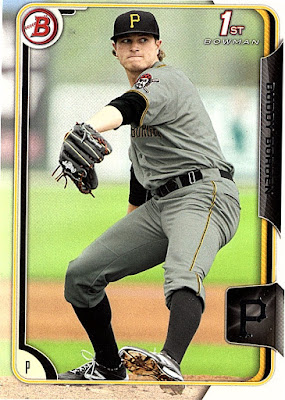 Buddy Borden was drafted in the 7th round in 2013. What caught my eye about this card is how much he looks like Gerrit Cole on this card. I would be completely fine with him pitching that way too...... 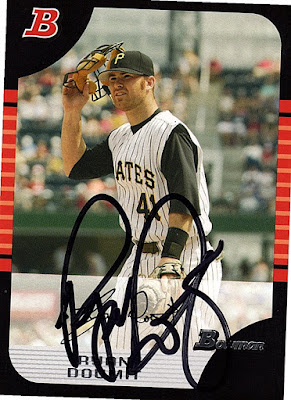 Ryan Doumit is an interesting what if player for the Pirates. Doumit was an offensive minded catcher who struggled staying healthy. A couple years into his career the Pirates started experimenting with him in the outfield, but scrapped the idea shortly after. Eventually he signed with the Twins, but his catching career hit a halt when defensive metrics starting becoming mainstream. Doumit would rate as one of the worst defensive catchers every year and was among the worst all time pitch framers. He recently announced his retirement after not finding work this year.

You have to wonder if Doumit was coming through the Pirates system now they would have caught onto this and made him an outfielder early on in his career. He was a switch hitter and had enormous power. His numbers could have easily projected out to 25-30 homers in a season. As a catcher he was always banged up, and of course the plate appearances are hampered by the regular days off needed to stay fresh. Hindsight is 20/20.

As far as I know Doumit only had one certified auto so his autos are not easy to come by. Great looking card.

Thanks for the great cards Tom! I'm still liking my prediction that the Central will get both wild cards. It has been fun watching the Cubs this year. Nice to see the Buccos finally hitting their stride too.

Thanks for reading.
Posted by BobWalkthePlank at 9:44 PM