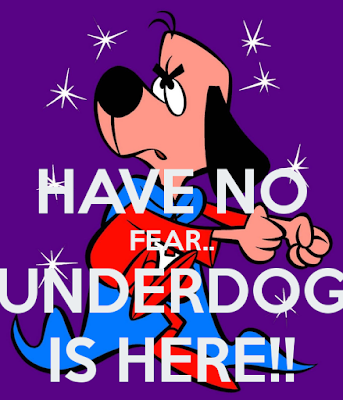 A few months back Zach "The Underdog" participated is some random group breaks in which his designated team was the Pirates. Being a cool dude he contacted me about a trade. I was able to find him a few high end Padres in order to secure these beauties.....

This is kind of a crappy scan, but this card was the main attraction. 2014 National Treasures was a great set for Buccos. This Cutch is /99 and features his nickname to go along with a jumbo jersey piece. Awesome! 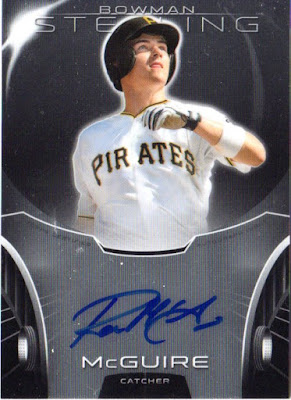 I can remember if Bowman Sterling was part of the break or if Zach had this one put aside for me. Either way I'm happy to add McGuire cards to the collection.  Reese is a high end prospect in which the Pirates drafted along side Austin Meadows in the first round a couple years back. Most prospect evaluators loved what the Pirates did that years as both McGuire and Meadows look to be top talents. 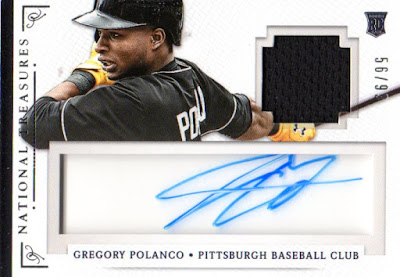 The other high end card of the trade is this Gregory Polanco auto jersey. Obviously I'm a huge fan of Polanco as he has high ceiling. Even with his bat still trying to adjust to major league pitching his defense and baserunning allow him to be a very valuable player. If he learns to hit a little more he would be a comparable to someone like Alex Gordon but with more speed.

Some GQ Buccos. I was a fan of the Walkoff winner subset. The card featuring Walker was a walkoff homer opening day. 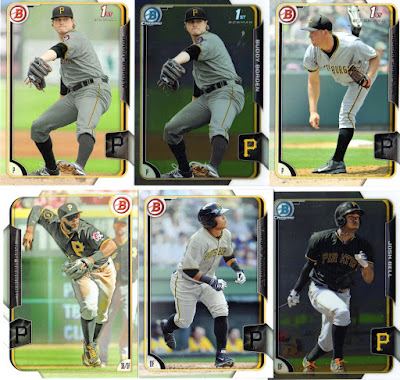 It is looking more and more like Josh Bell might play a significant role in Pittsburgh next year at first base. Always exciting when the home grown players make their debut.  If all goes well Top 10 prospects Tyler Glasnow, Jameson Taillon, Josh Bell and Alen Hanson should debut. 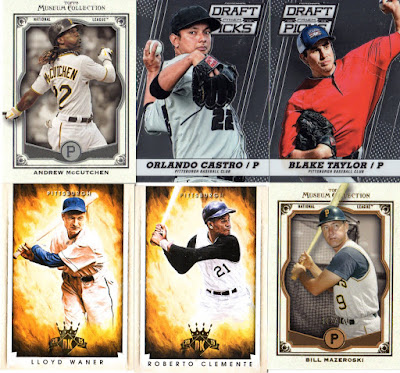 Some of the hardest cards to get my hands on are commons from the high end sets like Museum Collection. Always thankful to receive those in trades!

Thanks for the trade Zach. I'll be sure to hit you back in the near future. I've been accumulating some trade bait since our last deal.

Thanks for reading.
Posted by BobWalkthePlank at 3:22 PM