You really have to give some credit to the Royals. They just have a knack of putting things together by the 7th inning. Just think, if Carlos Correa hadn't made that error in the division series they most likely get beat by the Astros.

Also, could you imagine if Eric Hosmer had been thrown out at home on that play in the 9th? Talk about a ton of hot takes today on stupid ESPN morning shows. Pretty much any throw that the catcher can handle and Hosmer is out and the game is over. The narrative this morning is that the Royals had a scouting report that Duda was a poor thrower, but I tend to think in the heat of the moment that Hosmer was just being aggressive. Glad it worked out for the Royals though, they were the much better team in the series.

My card buying tends to slow down in November. With the barrage of Xmas expenses I generally just focus on lower end cards. The good thing is I'll have plenty to keep me busy. First, the trial run of WAR Games is wrapping up this week.  Holy smokes that was challenging. I can't wait to share the results with everybody and get the blogosphere involved.  It is very fun.

The other cool thing going is that 2015 Update has a ton of Pirates. I'm a sucker for the low end guys that get thrown into these sets. I've already picked up two printing plates for great prices. I may even buy a box soon or tell my wife to get me one for Xmas! 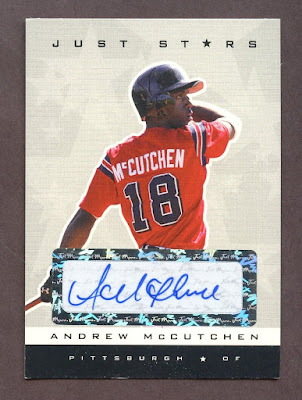 If you want a cheap Cutch auto these Just versions are the best way to go. Normally, they tend to fall in the $10-15 range. I don't actively search these out, but this marks the 2nd Just auto I've purchased in the last month. Nothing too fancy about these other than you get the full McCutchen auto and not the compressed version the more recent cards have.


Posted by BobWalkthePlank at 6:37 PM