The Mountaineer basketball team won the Las Vegas Invitational tonight beating Richmond and San Diego State and decisive fashion. Nice to win that thing for a change. We had made the championship twice before and lost in 2008 and 2012.

I'll be attending the final regular season WVU football game this afternoon. While some people are viewing the season as a disappointment, it really has played out exactly how the odd makers said it would. The Mountaineers 4 losses were all in a row and to high tier opponents. I think the sequencing just left a bad taste in peoples mouth. We lost in overtime to Oklahoma State and had to play on the road against Oklahoma, Baylor and TCU.  On a positive note the home games next year are going to be top notch!

On a side note former Mountaineer and current St Louis Ram Stedman Bailey was shot twice in the head a few days back. Miraculously he is expected to recover. The situation is still being investigated so no details have been released.

Here is the last card I picked up of Stedman. 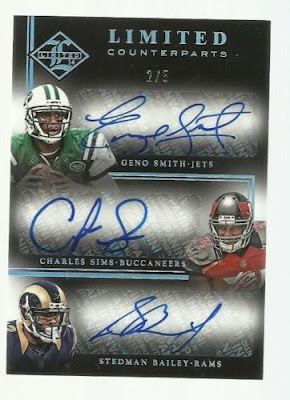 Pretty sharp looking card of three former Mountaineers. I went hard after this card since I wasn't sure if another copy would show up. Thankfully the final total was only around $30 which is a pretty high end purchase for my WVU collection but a nice centerpiece. At the beginning of the year this card would have carried more of a premium as it was looking like Geno was going to start and Sims was going to play a prominent role in Bucs offense. Now with Geno riding the bench and Doug Martin regaining his form from a couple of years back the value of this card is only driven up by die hard WVU fans. Plus it helps not having Tavon Austin who continues to sell pretty well.

Posted by BobWalkthePlank at 10:03 AM