These are the Good Weekends (Basketball, Football, Beer, Cards)

While I'm always sad to see baseball go, I do get really excited for college basketball. WVU has their first regular season game tonight against Northern Kentucky. The team is returning ten players so expectations locally are high, while nationally they seem to be flying under the radar. I thought they might get some top 25 love coming off a sweet sixteen run, but we start unranked. Preseason rankings are stupid anyway so I guess it doesn't really matter. This also marks my 10th year as a season ticket holder.

Tomorrow afternoon WVU football plays Texas. The game holds a good bit of importance for the Mountaineers. If we beat Texas we have a reasonable chance to win out and salvage the season. The sky was falling after we took 4 losses in a row, but we were underdogs in all 4 games (Oklahoma St, Oklahoma, TCU and Baylor). As you can see the schedule makers were unkind this year. To add insult to injury the last three of those games were on the road.

For all the beer nerds out there I've loaded down on a few high end releases. The drink of choice tomorrow will be Founders Backwoods Bastard.  It is a bourbon barrel aged scotch ale that is only released in November. Tasty stuff!

Enough of me blabbing about a team you most likely don't care about. 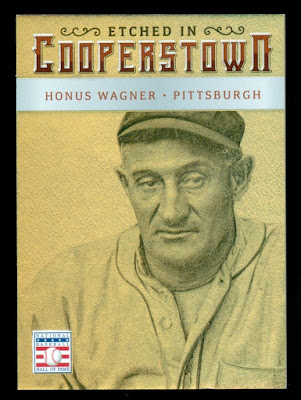 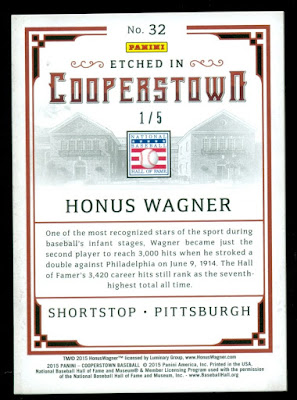 A seller that I'm a frequent buyer from on eBay must have went crazy with this set as he probably had 200 cards for sale. This Honus set me back $7 which seemed reasonable. The good thing was I utilized the combined shipping and got some of my frequent trade partners some goodies too. I'll probably have a mass mailing late next week!

Have a nice weekend!
Posted by BobWalkthePlank at 3:51 PM