The 2006 All Star game was played in Pittsburgh and to this day is still in my top 5 sporting events that I've ever attended.  My brother and I went all out and purchased tickets for the entire weekend. That year the Pirates had two representatives. 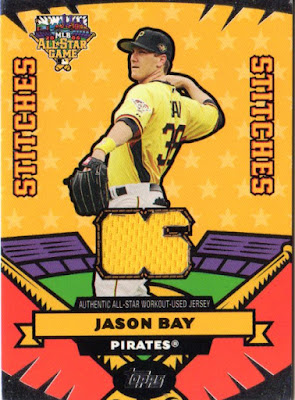 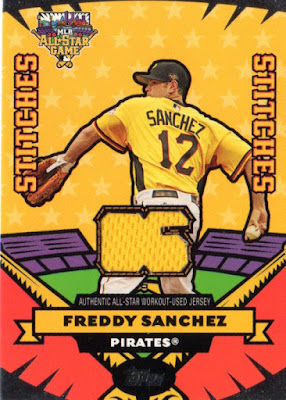 At the time Bay was well established and deserved to make the team.  The big surprise was Freddy Sanchez who wasn't even on the ballot. With a strong write in campaign by the Pirates, Sanchez would be voted in as one of the more unlikely players to ever make the team. Sanchez's dream season would continue all the way until the last day of the season season when he secured the NL batting crown.

The above cards feature pieces of warm up jerseys from the All Star game in Pittsburgh. I purchased these in the same lot at the multi-sport cards I featured yesterday. Always fun when you a card triggers a cool memory.

Thanks for reading.
Posted by BobWalkthePlank at 3:07 PM