A new trade partner! Brett from Cooperstown Exit 3:16 is newer to blogging but from what I understand has traded with Super Traders creator Wes for quite a while. The nice thing about trading with Brett is that he is the Nationals representative. The Nats are under represented in our blogging world so it was nice to Brett create a blog and take our Nats cards.

Last month I sent Brett some Nats I had been hoarding for quite sometime and he rewarded me with a bubble mailer full of Pirates and Steelers. 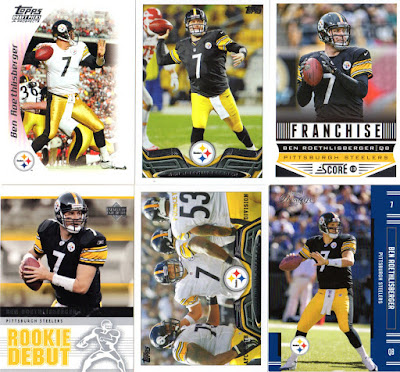 I'm sure a joke exists about having so many Big Ben's in one place but we'll let that slide for now. I love receiving Steelers cards in trade because I've pretty much stopped adding on eBay.  Pirates and WVU take most of my card funds. 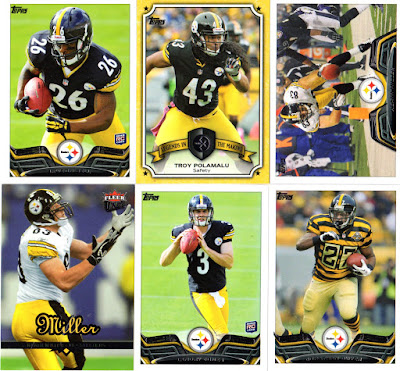 Heath Miller retired after this season.  He was about as steady as they come at the tight end position and will likely be hard to replace. The Steeler fans will have to find something under than HEATHHHHHH to yell when a tight end makes a catch. 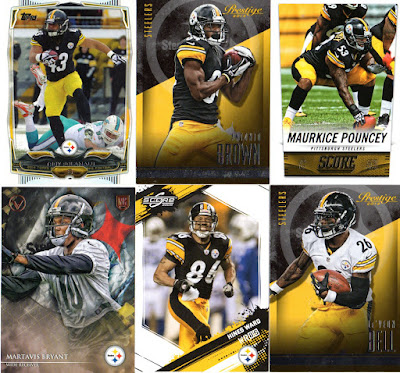 Maurkice Pouncey is a great talent but is made of spare parts and glass. When playing he is pro bowl level, but has already suffered two significant injuries in his short career.

I'm so happy Josh Bell is healthy and likely to make his MLB debut at some point this year. The Pirates gave him a boat load of money to skip college and sign with them. His first two years in the system were plagued by injury, but he has been regaining his value ever since. Now he is the Pirates #2 prospect .

Manager cards are the best!

I like Archives, but the prices the last few years have been outrageous for boxes. The Major League and Will Ferrell autos really drove up the price.

Thanks for the cards Brett. I'll continue to hold some Nats for you.

Thanks for reading.
Posted by BobWalkthePlank at 10:51 AM