A new trade partner! Baseball Every Night is a relatively new blog started by Darryl Strawberry fan Peter. A couple weeks back Peter commented on one of my posts saying that he had many of the Pirates from this years Topps. Being that a supply safe haven to any Buccos card a trade was born. 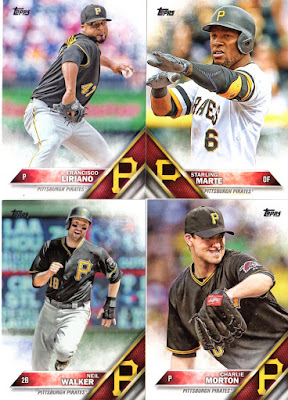 Man, the Neil Walker trade has been a huge bust for the Buccos. The Bucs took a gamble and traded Neil Walker who had only one year of control left for Jon Niese who had a year left on his deal, but had two team options. The Pirates figured if that they could fix Niese they would have three years of control at a very team friendly price.  In theory it was a worthwhile gamble.

Long story short is that Niese has been terrible. He has already been taken out of the rotation and could be dfa'd before too long. In a candid interview Pirates GM Neil Huntington said the trade has been a disaster. He said that options were limited trading Neil Walker in that the return could have either been low profile prospects or low upside veterans. Huntington said they took the gamble on getting someone who could help right away, but it backfired. The ebs and flows of being a major league GM....

Of the actual cards the Marte is my favorite!

Play at the plate cards are always top notch. I've found a few of the parallels for the Cervelli card. One of these days I hope he gets a certified auto in the Bucco uniform.

I was really happy to see Feliz and Stewart on the checklist for Series 2. I love me some Cutch, Marte and Cole, but it is refreshing to see some more of the unheralded guys on the roster. 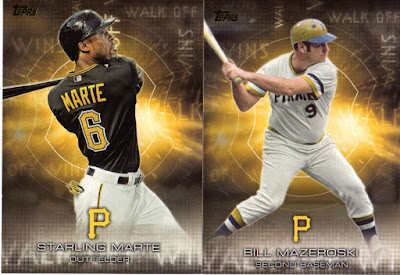 I've commented several times on Topps using the less than flattering picture of Maz at the end of his career. Seems like their should have been hundreds of better choices. 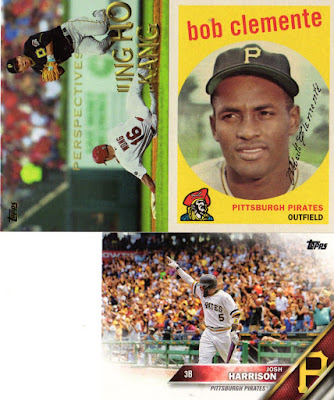 The Perspective cards were really cool. Very Stadium Club esque.. Reprint or not Clemente cards are always awesome.  He would be a shoe in for the Mt. Rushmore of cardboard. Right up there with Bob Walk!!

Thanks for all the great cards. I'll be sure to come up with something to send back your way soon. As for everyone else please give Peter's blog a follow.

By the way Peter I'm going to start sending you to Pirate games as you have a much better track record.  I'm freaking 1-6 this year.

Posted by BobWalkthePlank at 9:01 PM

Email ThisBlogThis!Share to TwitterShare to FacebookShare to Pinterest
Labels: baseball every night, trade 2016