Walked Right Into it

Neil Walker was a steady contributor during his Pirates tenure.  Essentially the perfect type of player to surround guys like Cutch and Marte.  My only issue with him was that he was from Pittsburgh. I shit you not it was mentioned 3 million times a season.  My friends and I would just text each during random conversations "hey did you know Neil Walker was from Pittsburgh." I need to ask Brian if they do the same thing with Joe Mauer in Minneapolis.

Let's get back on track. As for my Walker collection it is probably one of the more complete in my Pirates collection.  When he first broke through in the big leagues he had a bunch of autos and then for whatever reason companies stopped producing autos and relics of him.  This allowed me to go back and find many of the holes in my collection.

Even though Walker s now a Met, I still actively search for cards. Last month I secured a big one. 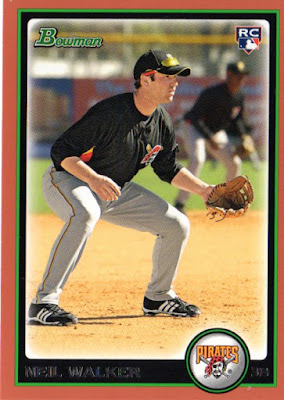 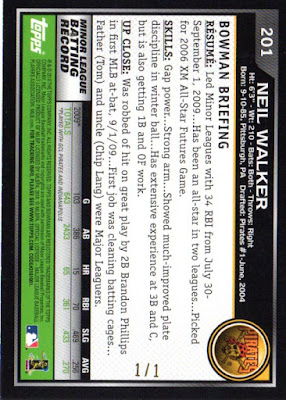 Normally 1/1's  from Bowman of established major leaguers are just too expensive to chase, but this card had a noticeable mark in the top left. Right when I saw the card I put a high bid of $40 right after it went live and it held up to the end. The final price was $38.  So this is by far the most I've ever spent on a Walker card, but it is now the centerpiece of the collection.

Did you know he was from Pittsburgh?

Thanks for reading!
Posted by BobWalkthePlank at 1:34 PM