Playing the Odds With Multiplayer Autos

Rookie multiplayer autographs are pretty commonplace these days. They are usually high $ cards that garner heavy attention on the secondary market. They are among the most desired cards among the "sick hitz" crowd and case busters. Getting these cards on eBay right after release usually guarantees big bucks for the seller.

In my experience buying these cards around release time is almost a guaranteed waste of money. First you just have the nature of how a prospect develops in baseball. It takes a looooong time to make it to the big leagues. This is especially true for high school players.  At some point during that journey the player is likely going to hit a snag during his development. This usually causes fluctuations in pricing. The Pirates have had some high end prospects over the last 5 years and all of them have hit a lull at some point.

My example above doesn't even take in account that multiplayer autos just enhances the risk for each player added.  Take this card that I just bought off eBay. 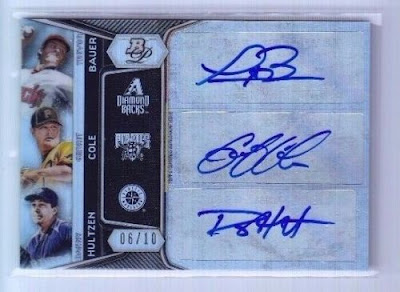 Gerrit Cole, Danny Hultzen and Trevor Bauer were the first three picks in the 2011 draft. I would venture to say this card was $100 + at release time without looking.  That price just had no chance to hold up over time. I paid around $24 a couple weeks back. Hindsight is always 20/20, but when was the last time a drafts first three picks panned out enough that their autos could hold $100 values over the long haul.  The 2010 draft is probably the only hope for this to happen as Harper and Machado can carry Jameson Taillon whether he pans out or not.

Right now Gerrit Cole has blossomed into a good pitcher, Bauer has been inconsistent and Hultzen's career has been marred by injury and command issues in the minors. This card has no chance to regain its value at release time.

I've shown this card several times on the blog, but it may be even a better example. 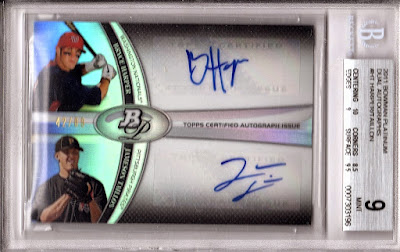 During the 2010 draft Bryce Harper was considered a once in a generation talent and many scouts called Jameson Taillon the best high school pitching prospect since Josh Beckett. They were the top two picks. I have no idea what this card cost at release time, but I'm sure it was extremely high. It was the kind of card I would have never thought about owning.

In 2014 both Harper and Taillon suffered injuries. I swooped in and bought a card that I normally would have not been able to afford. Right now I'm sure the card has gained back much of its value as Harper got healthy and became one of the best in the game and Taillon made his long awaited debut. It just proves even the highest end cards can have good buying times.

Prospecting is hard enough for just one player. Unless you sell baseball cards for a living it probably serves you best to be patient on the multiplayer cards.

Posted by BobWalkthePlank at 6:10 PM