On Wednesday when I showed off my prize winnings from Brian he informed me that one of the unopened packs was in fact a Pirates hot pack. Sure enough when I examined a little closer the pack yielded some Pirate goodness. 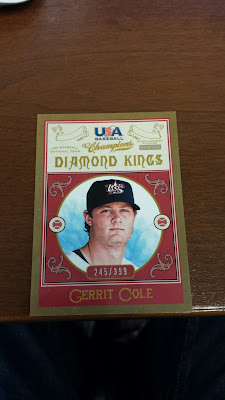 I don't hide my love for Gerrit Cole.  He is one of my favorite Pirates. Over the last few years I've made it my mission to add as many of his cards as humanly possible. Brian was nice enough to add this numbered USA Diamond Kings cards. USA cards are a nice way around the licensing issue.

It has been fun to watch the progression of Cole. He seems to be developing into the ace the Pirates hoped for. 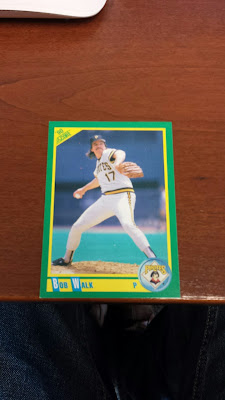 Mike Gonzalez was the first Pirate closer that I remember using a theme song. If I recall it was the P.O.D song "Boom." Gonzalez has a pretty interesting trade history with the Bucs.

July 22nd 2003: The Pirates traded him to the Red Sox for Brandon Lyon
July 31nd 2003: The Pirates receive him back along with Freddy Sanchez from the Red Sox for Brandon Lyon and Jeff Suppan.
- If I recall this had something to do with failed physicals with Freddy Sanchez.
The Pirates would go on and trade Gonzalez to the Braves for Adam Laroche in 2007. At the time this was a pretty big get for the Pirates as Laroche was coming off a big year for the Braves. 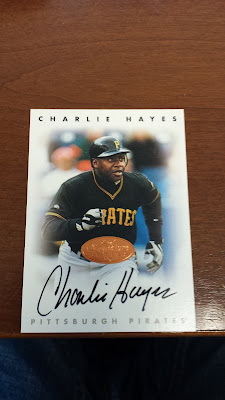 Hayes only played 1 season with the Bucs, but he did get a couple of cards. I love these Leaf autos. 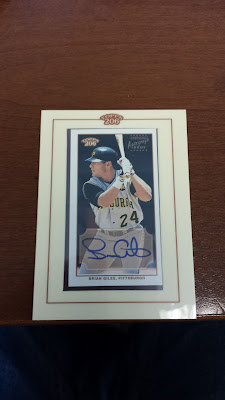 The grand finale is the Topps 206 Brian Giles auto. Giles played for the Pirates right during the boom of relic and auto cards so he has a decent amount on the market. I really dig the framed autos! Recently I've been on a mission to add some of his cards I've missed over the years, so it is always nice to receive via the blog route.

Thanks for all the great cards Brian. I've been accumulating some great Twins stuff to keep our momentum going.  I may be sitting on an auto of a Twins Hall of Famer......

Thanks for reading. Have a nice weekend.
Posted by BobWalkthePlank at 1:57 PM