My wife surprised me with tickets for the Pirates game this afternoon. The game was plagued by bad weather, but managed to get it in with about a 25 minute late start and one rain delay. The highlight of the game was one that had most Pirate fans worried as Andrew McCutchen took a fastball off the elbow. Thankfully xrays were negative and it looks like he won't miss much more than a game. The Pirates would go on and win the game 8-4. 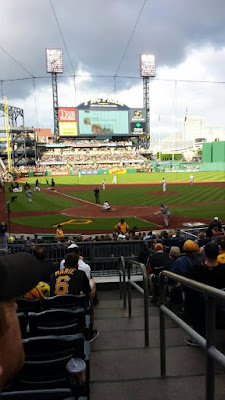 I had great seats right behind home plate. As you can see the clouds were rather ominous. 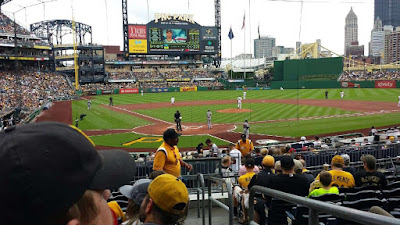 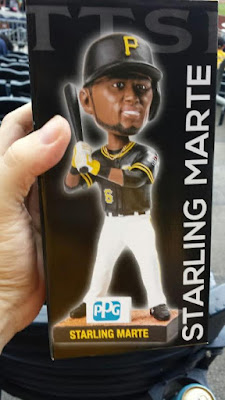 It was Marte bobble head day so that was an extra bonus. The bad thing is the rain pretty much destroyed the box, so I'll probably just have to display the piece on my desk.

I had been on a small losing streak at games so it was nice to break the streak. Nice to witness a convincing win. It would be nice if the Cardinals would lose a game every once in awhile, but at least the Pirates are pretty secure in the Wild Card Standings.

Posted by BobWalkthePlank at 11:04 PM