A couple months back I started a small list of cards on the right side of the homepage that have avoided me over the year(s). These are not necessarily high priced cards, but either rarity or bad luck have kept them from my collection. The Card Papoy helped me out with one right away by supplying the Heritage Bill Virdon auto. Finally I was able to knock one off this past week.

Of all the cards I had on my list I figured the easiest to locate would be the Pirates sliver framed team card /20. The difficult part with this card is that the prices for the silver frames have been strong on the secondary market. The first few that hit were selling for over $30 which was way more than I was willing to go. I even found the printing plate of the team card for just over $20. Thanks to stumbling on a buy it now auction I was able to find the card for $16. Not a great deal, but I was happy to get a card that I wanted since Series 1 was released. 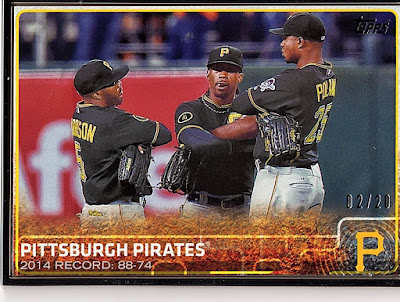 I've made it known that I'm not a huge parallel fan. The only ones in recent years to really catch my eye are the acetate and silver frame cards from Topps. Usually the only players I chase are Pirates that don't get much love relic or auto wise. This card kind of falls in the middle somewhere as it was just so unique I had to have it. Since I have the printing plate and the silver frame it would be kind of cool to locate the acetate, but not a necessity. Just glad to put this one to bed.

I have a pretty extensive list of cards that could go on the White Whale list, but for now I think I will try to keep the list at a manageable 10 cards. To keep with the 2015 theme I think the new venture will be the Starling Marte base photo variation from Gypsy Queen. Not a super expensive card, but I've tried to win it about 10 different times and failed. Time to hunt for a deal!

Thanks for reading.
Posted by BobWalkthePlank at 10:24 PM