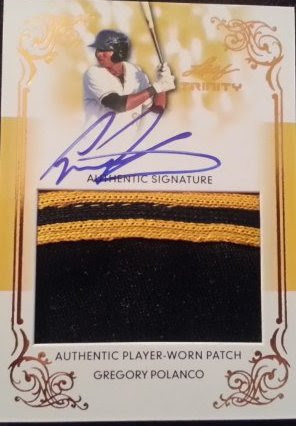 Gregory Polanco is the Pirates #1 prospect in a loaded minor league system.  He will make his debut at some point this season in right field as he seems to be major league ready.  The Pirates have been rumored as of today to be shopping around Jose Tabata so that would seem to fast track Polanco even more.  My guess is Polanco will be staring in right field by early June.  He is good enough to break camp, but the Pirates have a strong precedent of slowing the service time clock by holding their prospects a couple of months. Gerrit Cole was handled the same way last year.

The above card is from 2013 Leaf Trinity.  If you like prospects cards this set was for you.  While Leaf does not have a license I feel this was one of the best prospect sets of the year.  The cards had nice on card signatures and the patches were large and unique.  The checklist was strong as well.  I cherry picked most of the Pirates from the set for pretty reasonable amounts.  If you are a Pirates fan this set was for you. To go along with Polanco the set featured Austin Meadows, Reese Mcguire, Tyler Glasnow and Alen Hanson.