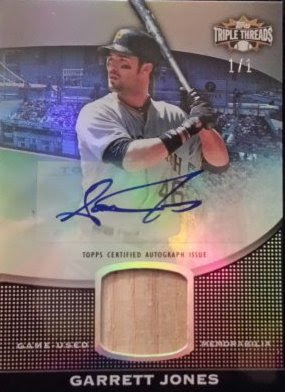 I'm a huge fan of Triple Threads.  It is by far my favorite high end release  I'm always looking for Pirate hits, most notably from the 2011 edition.  Several months a go I made a purchase of around 30 different relic/auto cards from the set and have made it my mission to see how many of the "triple play" combos I can make.  Each card had 3 variations numbered the same.  I just recently completed all three of the Mccutchen jersey variations numbered to 9.

The card shown is a 1/1 Garrett Jones auto bat piece card.  Garrett had a tough path to the majors as he was originally drafted by the Atlanta Braves in 1999 and released after 3 years in the system.  The Twins picked him up and he slowly made his way up in the system but being a first baseman he was blocked by Justin Morneau. He made his major league debut in 2007, but his time was limited.  After the 2008 season he became a free agent and was signed to a minor league contract by the Pirates.

Garrett instantly became a fan favorite in Pittsburgh as he hit the ground running when he got his chance to play.  He blasted 7 homeruns in his first 12 games and was named NL rookie of the month for July.  Garrett was a mainstay in the middle of the lineup through the 2012 season.  Unfortunately he struggled in 2013 and the Pirates non tendered him after the season and he went on to sign with the Marlins.

At least Garrett can say he is the only Pirate to do this...

Posted by BobWalkthePlank at 9:20 PM