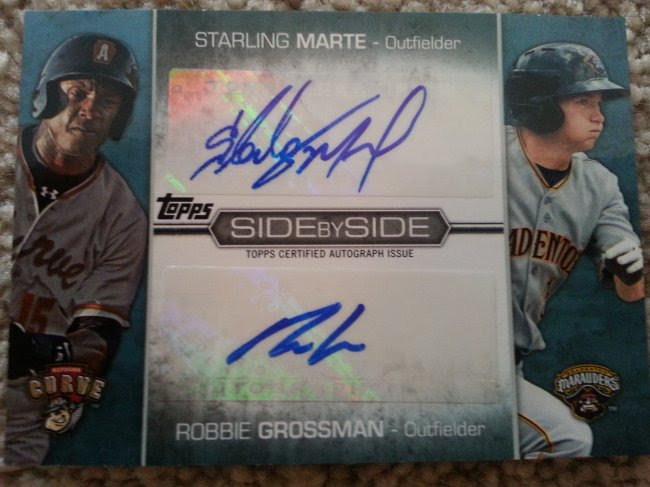 Starling Marte broke onto the scene last year for the Pirates and helped solidify left field for the Buccos.  It is looking like Marte, Mccutchen and Pirate top prospect Gregory Polanco will be manning the outfield for the foreseeable future.  I'm sure the Pirate pitchers will be happy to hear that, as all three grade out as plus defenders.

This card is from 2012 Topps Debut and is numbered out of 50 and features autos of Marte in his Altoona Curve jersey and Grossman in his Bradenton Marauders uniform.  Marte was an international signing who took some time to work his way through the system, but the Pirates patience paid off. He is a sabermetrics darling who accumulated 5.4 WAR (baseball reference) in his first full season. A lot of his value is tied up in his defense. According to many of the defensive metrics he should have won the gold glove.

Grossman was part of the deal that brought in Wandy Rodriguez from the Astros.  It looks like both Grossman and former Pirate prospect Rudy Owens have a chance to break camp with the Astros.
Posted by BobWalkthePlank at 10:13 PM