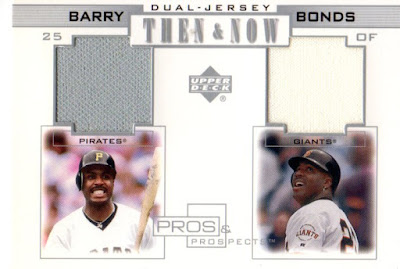 I've been trying to sort through a handful of cards a night as I continue my quest to become an organized adult.  I always have good intentions, but I get sidetracked easily.  Here is how the process goes.

1. Puts a few cards in sleeves
2. Finds a couple cards that might be good blogging material
3. Starts to read blogs
4. Looks at Twitter
5. Checks Fantasy baseball lineups.
6. Texts back and forth about fantasy football trades.
7. Calls it a night, will pick up tomorrow

Of the few cards I did look through today, this Bonds relic was probably the most notable.  Nice to see skinny Bonds compared to Hulk Bonds. In all seriousness I could care less about the steroid issue with him. The whole thing was so over the top with senate hearings and criminal investigations.  Waste of time and money.  The biggest issue I had with Bonds was that he was a miserable asshole.

This year when the Pirates played the Marlins, Bonds gave a pretty candid interview about his persona as a player.  Basically saying that he regretted the smug persona he created for himself and that he regrets being known as a bad teammate and a huge dick to the media.  I guess you get self reflective as you get up their in years.  I'm not sure how serious you can take him, but from all accounts he has been much better with interview requests.

Now back to card sorting /picks up phone to play Words with Friends.

Posted by BobWalkthePlank at 10:49 PM