A lot of fun stuff going on.  Tonight I had my last fantasy football draft. This league is my favorite as it has had the same group of guys for an extended period of time.  We have league shirts and a custom made title belt!  I'm not if I should be proud or ashamed.  You guys can decide. 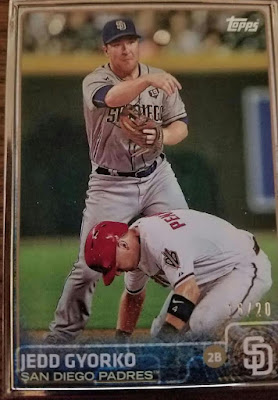 It has been really cool to watch Jedd Gyorko have a nice bounce back year with the Cardinals. He is the only WVU player in the majors right now so I'm really pulling for him. He has been one of the reasons the Cardinals have stayed relevant through all the major injuries to guys like Carpenter, Peralta, Diaz and Adams. Gyorko has played all four infield positions this year.

I'm still pissed Topps made the silver frames 1/1's. I tried to win a Michael Morse the other day and the damn thing went off for $40.  No thanks.

Hope everyone is ready for September baseball and the start of college football.  Lots of stuff going on in Morgantown this weekend!

Thanks for reading.
Posted by BobWalkthePlank at 11:29 PM