I don't really go out of my way to show pieces of my WVU collection until football season starts. I know many of you are active watchers of football so if there is ever an appropriate time to showoff some collegiate cardboard it would be football Saturdays. 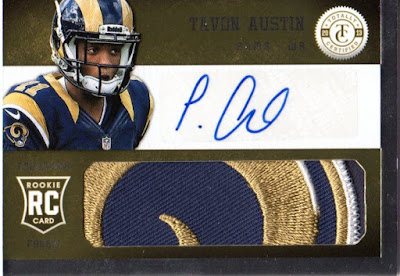 This Tavon Austin card was the main event of my card shop purchase when I was in Rhode Island.  Little did I know that all WVU football cards end up there.  The good thing about this card is that it looks super fancy, but didn't carry a fancy price.

The Rams just gave Tavon a bunch of money but still have yet to figure out a way to get him the ball. I think this is mainly due to the fact that Case Keenum is their quarterback.  Tavon has already scored touchdowns in his career via reception, rush, punt return and kick return.  Get him the ball. 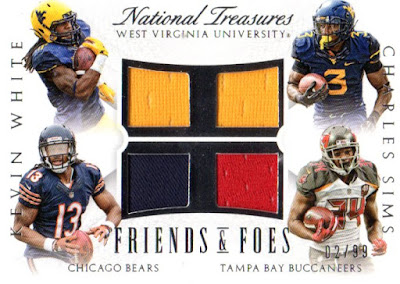 My true passion when collecting WVU guys is when they are featured in their college colors.  This great card features Kevin White and Charles Sims. Both play a vital part in their respective teams offenses. The WVU gold always looks good in relic cards.

WVU is playing a neutral site game against BYU today in Landover Md where the Redskins play. This really isn't much of a neutral site for WVU as the DC area is the biggest alumni chapter for WVU and only ~ 3hrs away from Morgantown.  Should be a solid showing from the WVU fans.

Enjoy the baseball and football today! Go Mountaineers, beat BYU.
Posted by BobWalkthePlank at 10:14 AM