Trade: Too Many Verlanders Delivers the WOW!

My collecting doppelganger in the blogosphere is Dennis from Too Many Verlanders. Our collecting habits are identical in sense that he focuses on Michigan and Tigers just like I focus on WVU and Pirates. Both of us have a large collection so sometimes we have to think outside the box, but this has created many great trades.

After a short hiatus from swapping Dennis and I are back at it. I hit him with a couple Topps contracts, but he promised that he was going to send a card that will get my attention.  Man was he ever right! Not only that he hit me with a ton of low numbered rookies and autos as well. 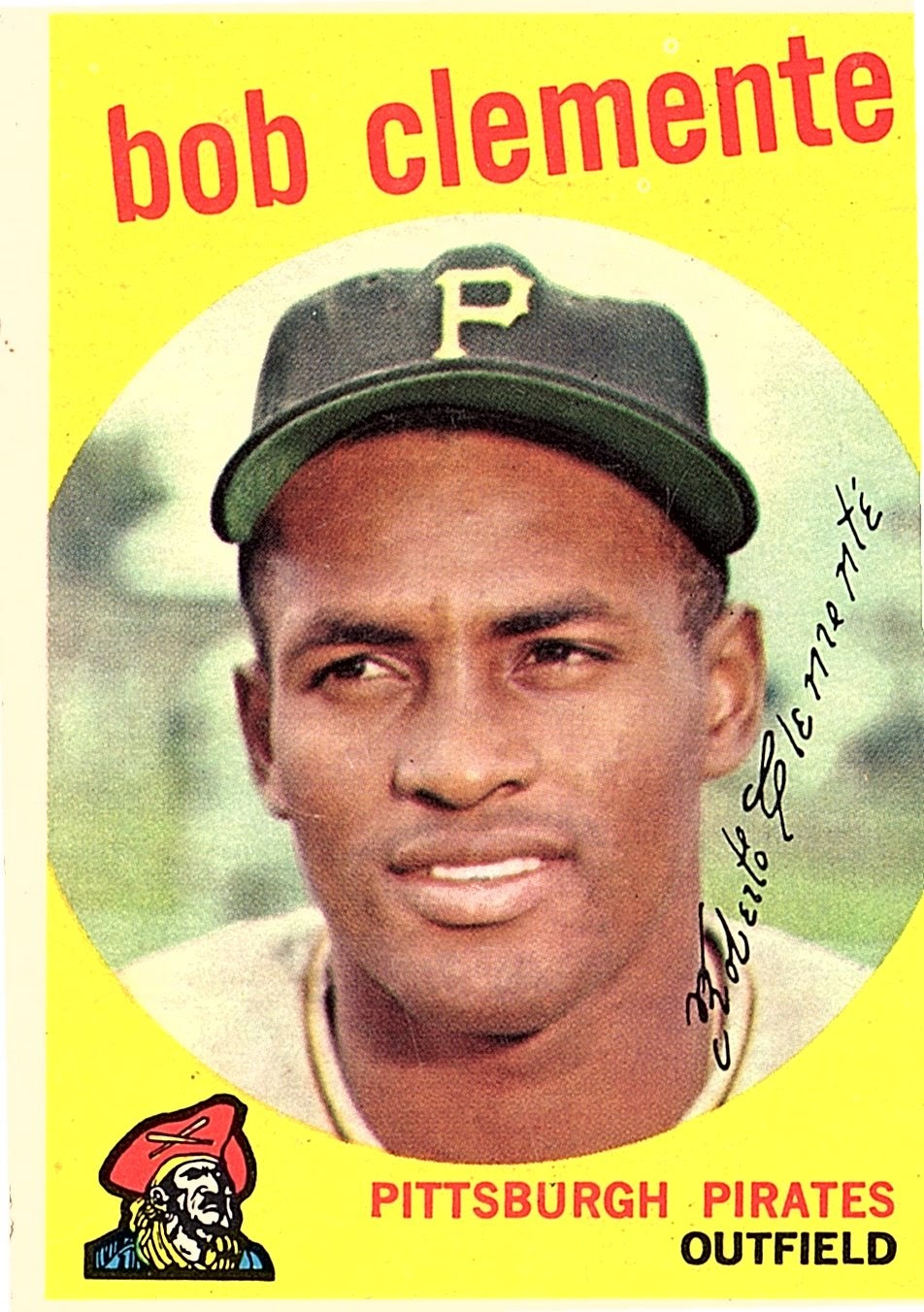 I think this definitely classifies as a WOW card. Dennis has made a habit of sending me high end vintage like a Maz and Dave Parker rookies, but this one takes the cake. I only have a couple of Clemente vintage cards with this now being the oldest. This 59 Topps has a nice look with the yellow border complementing the Pirate theme. Great card.

I would have been happy with just this one card, but that is not Dennis's style.  He sent a slew of hits of former WVU players and Buccos. 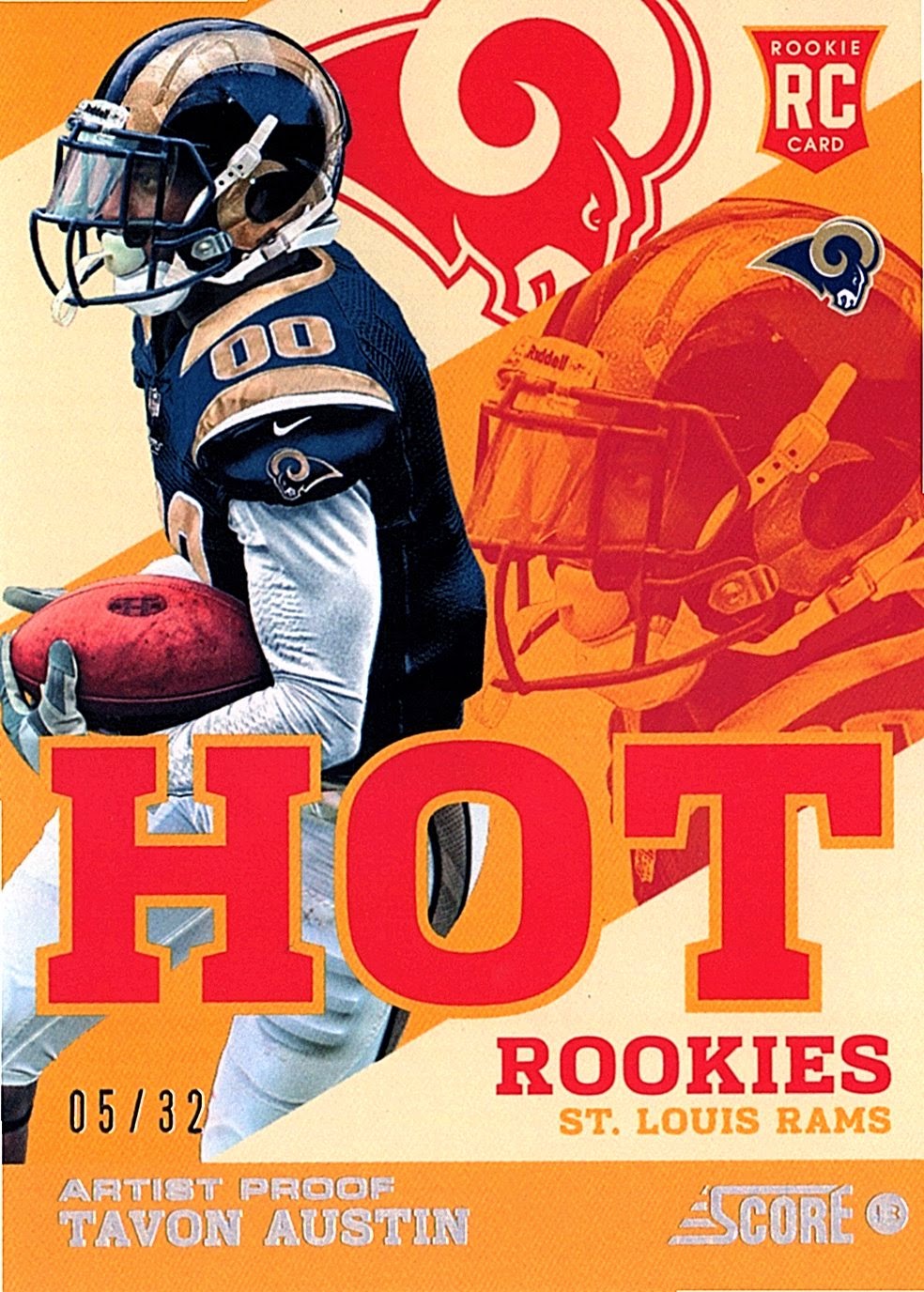 Part of me was hoping the Jets would trade Geno Smith to the Rams to be reunited with Tavon Austin and Stedman Bailey, but that wasn't going to happen.  Instead the Rams made a very unique trade with the Eagles swapping Sam Bradford and Nick Foles. Hopefully Foles can finally figure out a way to use Tavon's unique skill set.  This artist proof from Score is very low numbered to /32. Great card! 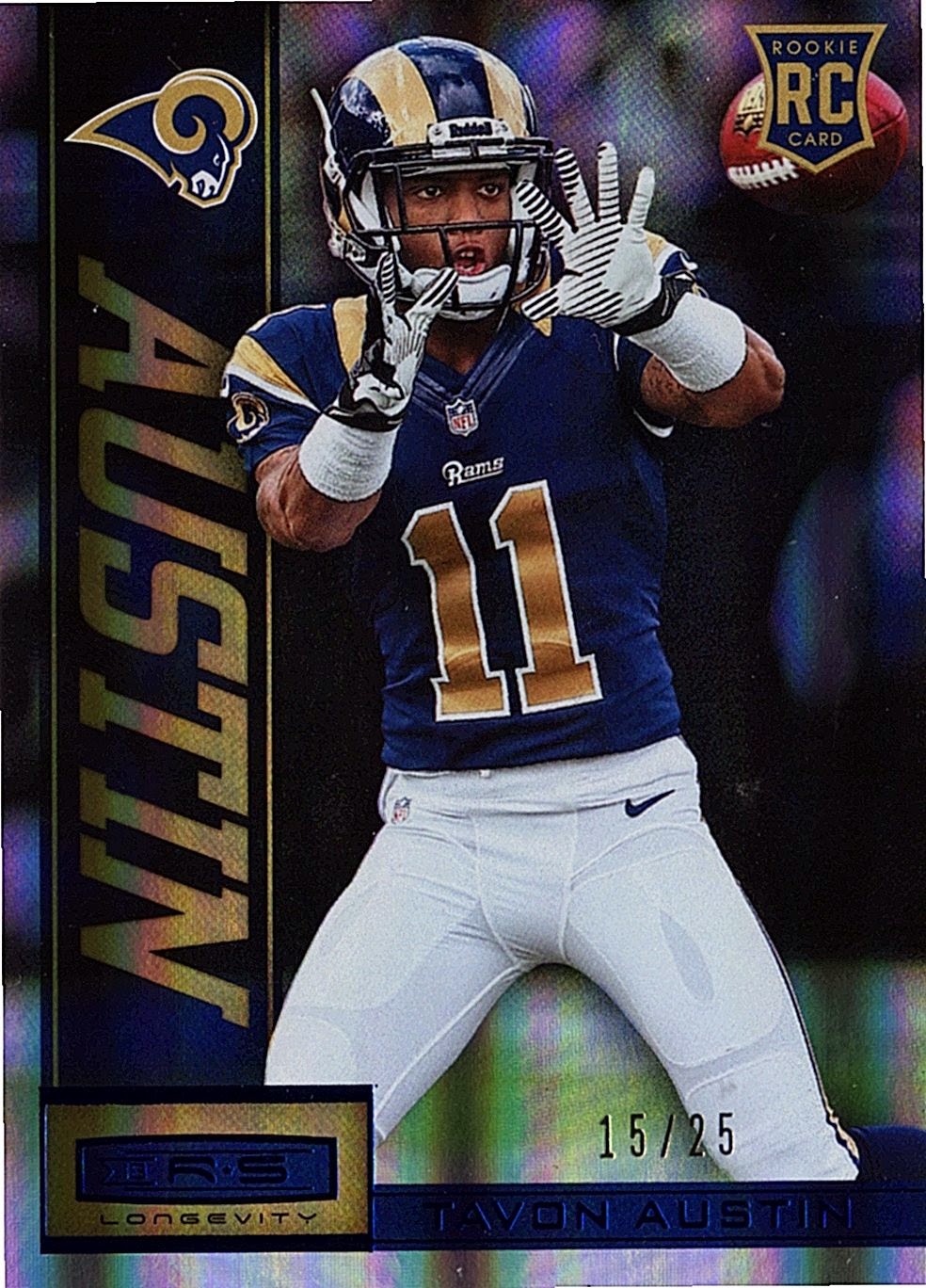 I remember having a lot of Longevity cards from Leaf Rookies and Starts. Panini continued the tradition. Another great low numbered rookie to /25! 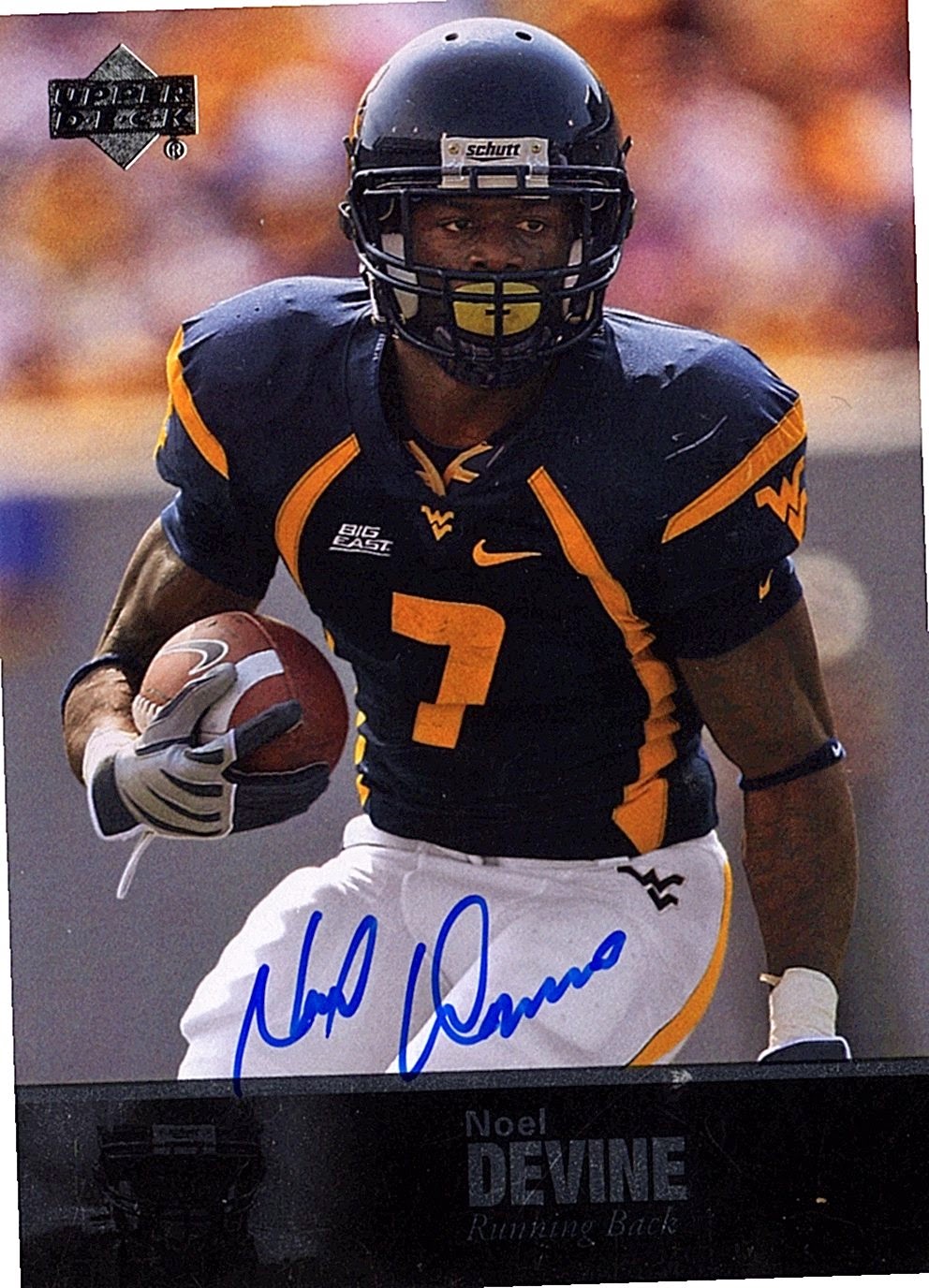 Noel Devine's life has been quite a tragic tale. He lost both his father and mother to AIDS and witnessed a shooting which killed a lifelong friend. Devine had a close relationship with Deion Sanders who helped mentor him through his transition from high school to college. Devine would go on to play four years at WVU and earn a college degree. He currently plays in the CFL. 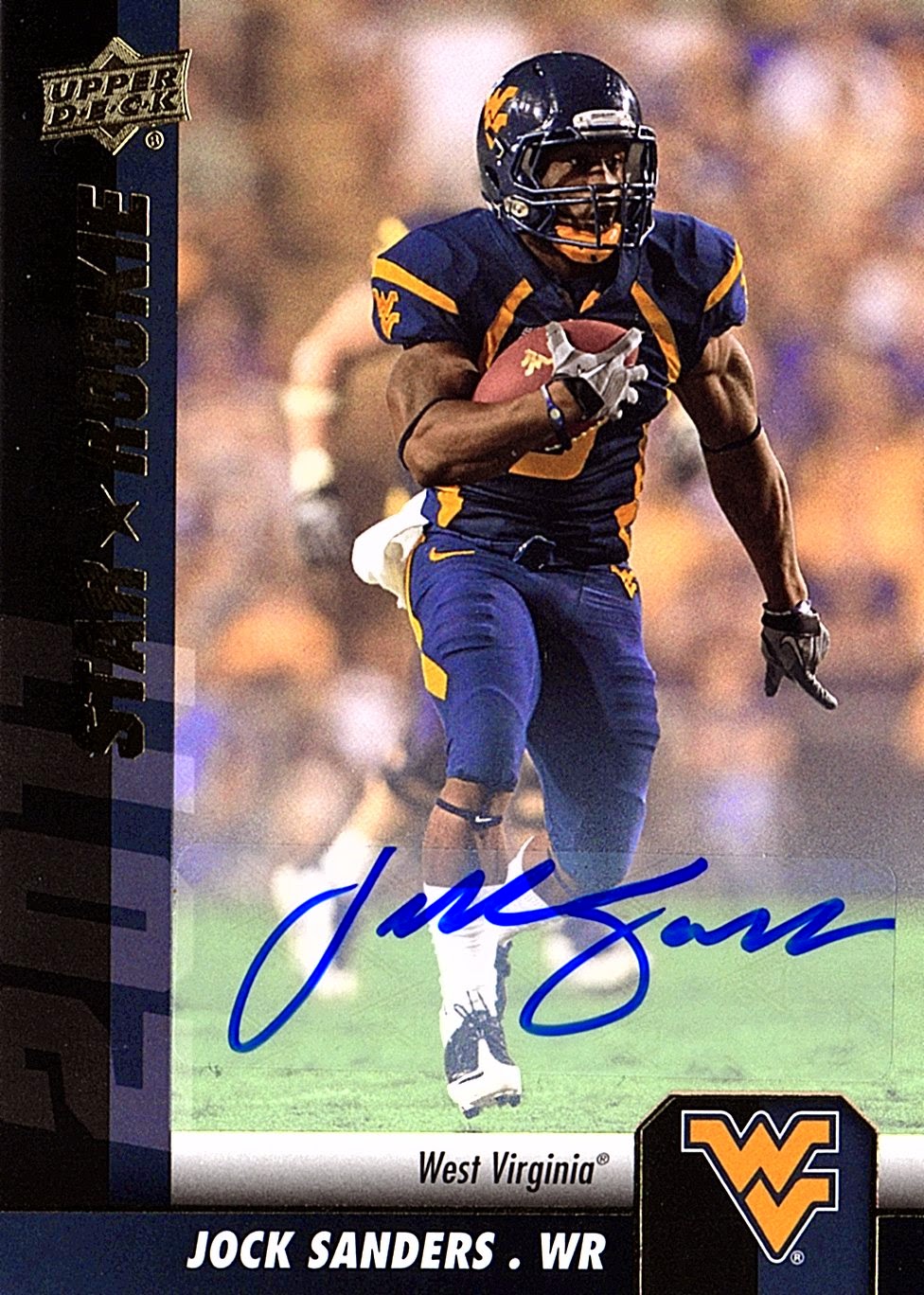 Another Mountaineer player who has found success in the CFL. Jock was a steady force for the Mountaineers. Always nice to see an auto as he only had a few releases. 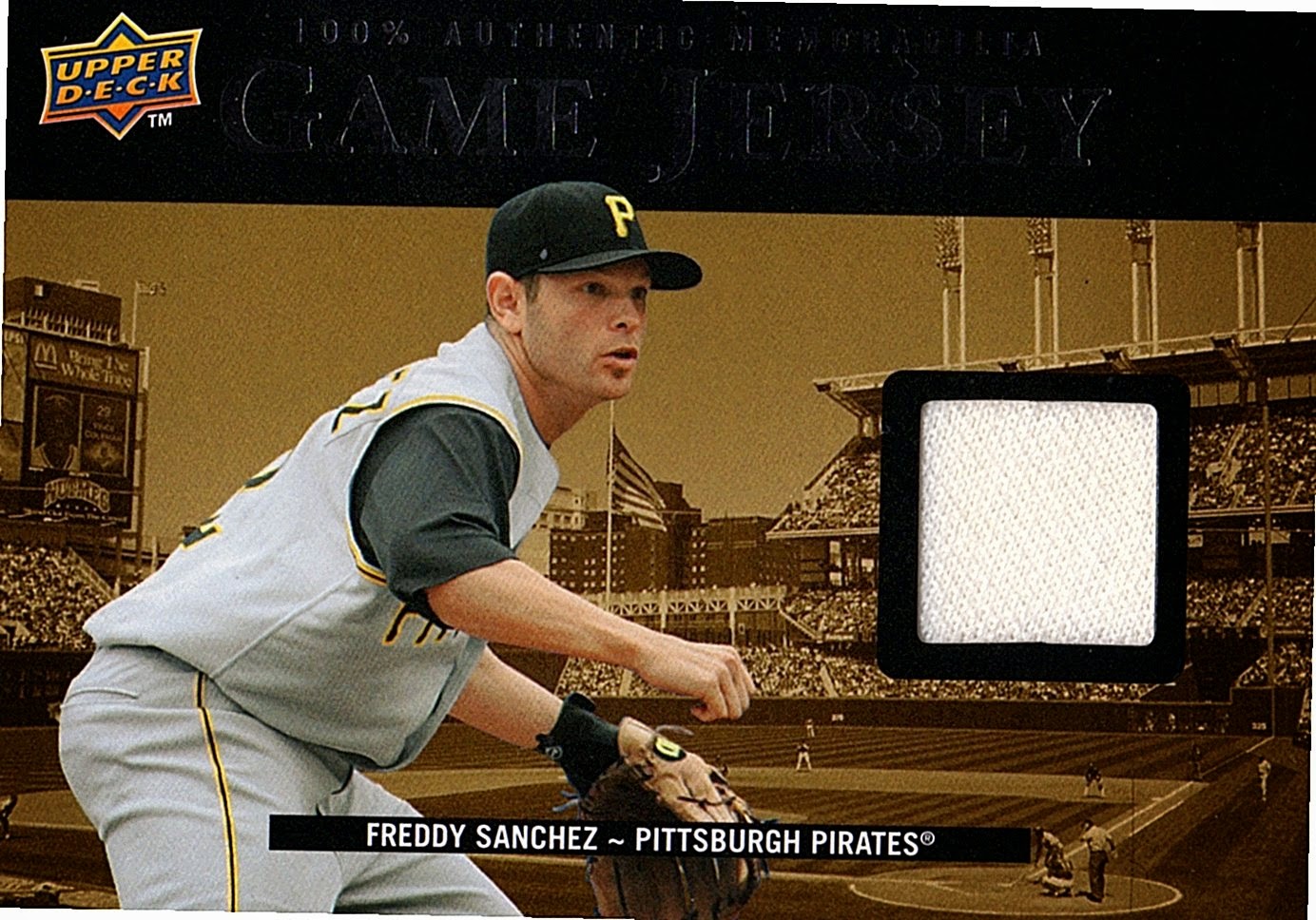 A nice Freddy relic. Freddy had a great run with the Buccos winning a batting title and becoming a three time All Star. 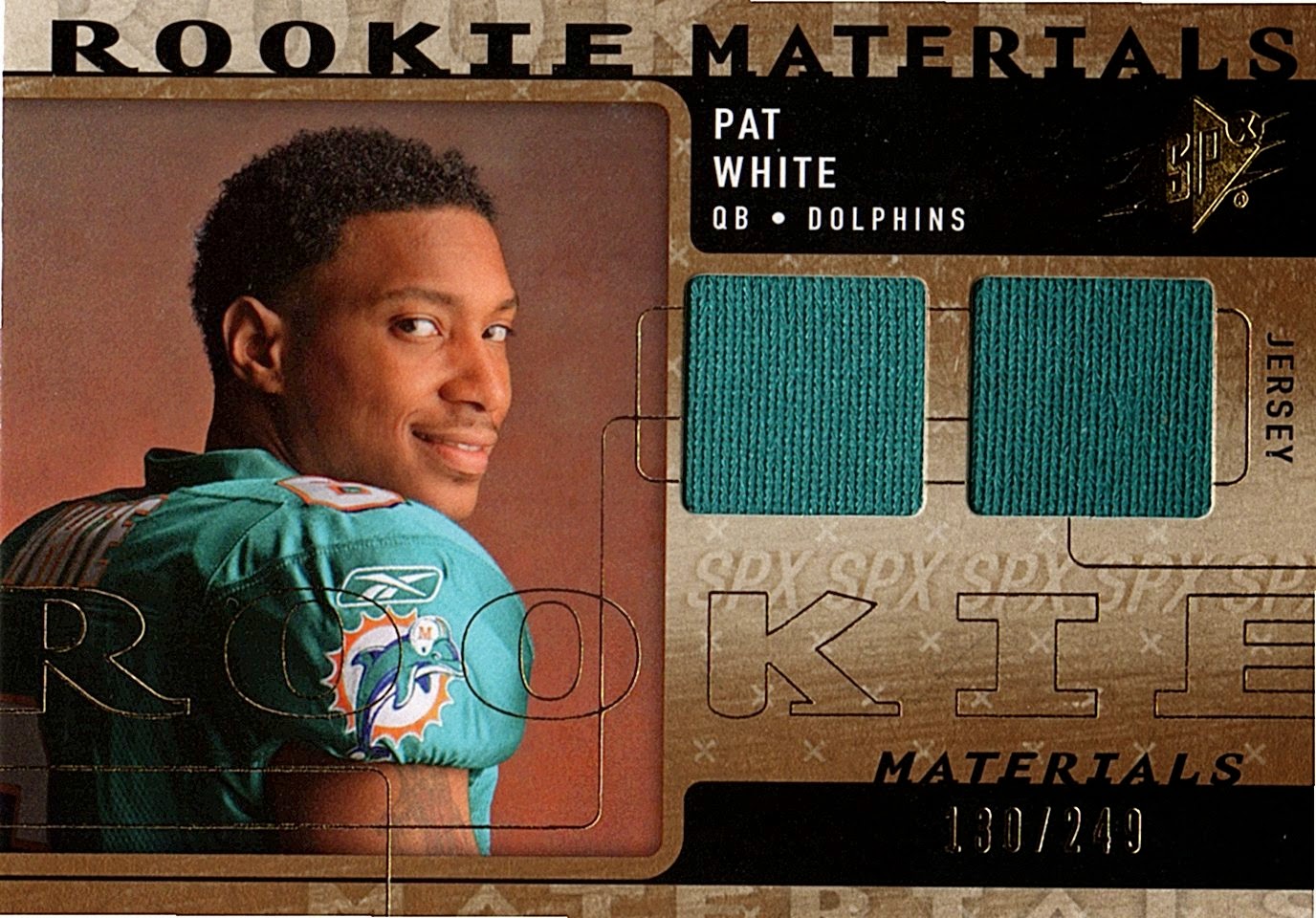 I'm hoping WVU might consider retiring Pat's jersey.  He is a legend around these parts. A 4 year starter who won 4 Bowl Games including two BCS games against Georgia and Oklahoma. The Dolphin teal always makes for some nice relic cards.

Pedro is off to a nice start this year which is very unusual for him. Often a slow starter he already has two homeruns. Most of the pressure is off the big guy as he is batting 6th and playing first this year.

VanBenschoten is a nice example that the Pirates were ran by idiots for 20 years.The Pirates drafted him as a pitcher, but most scouts said his bat is what will lead him to the major leagues. His junior year in college he led all of Division 1 in homeruns. Long story short he flamed out as a pitcher and had some harsh words for Pirate management. 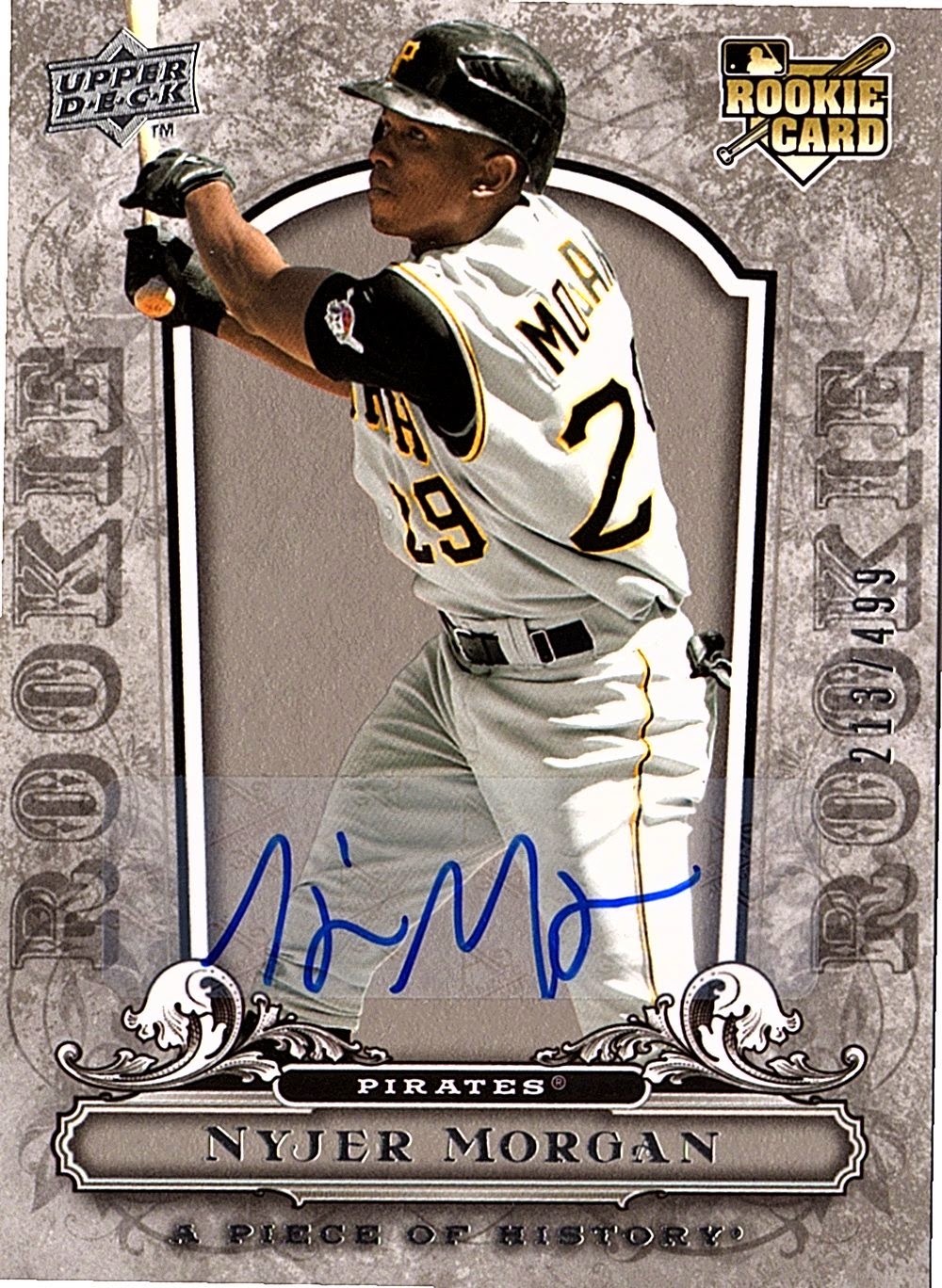 I nice auto of Nyjer Morgan before he turned into a weirdo with the Brewers. 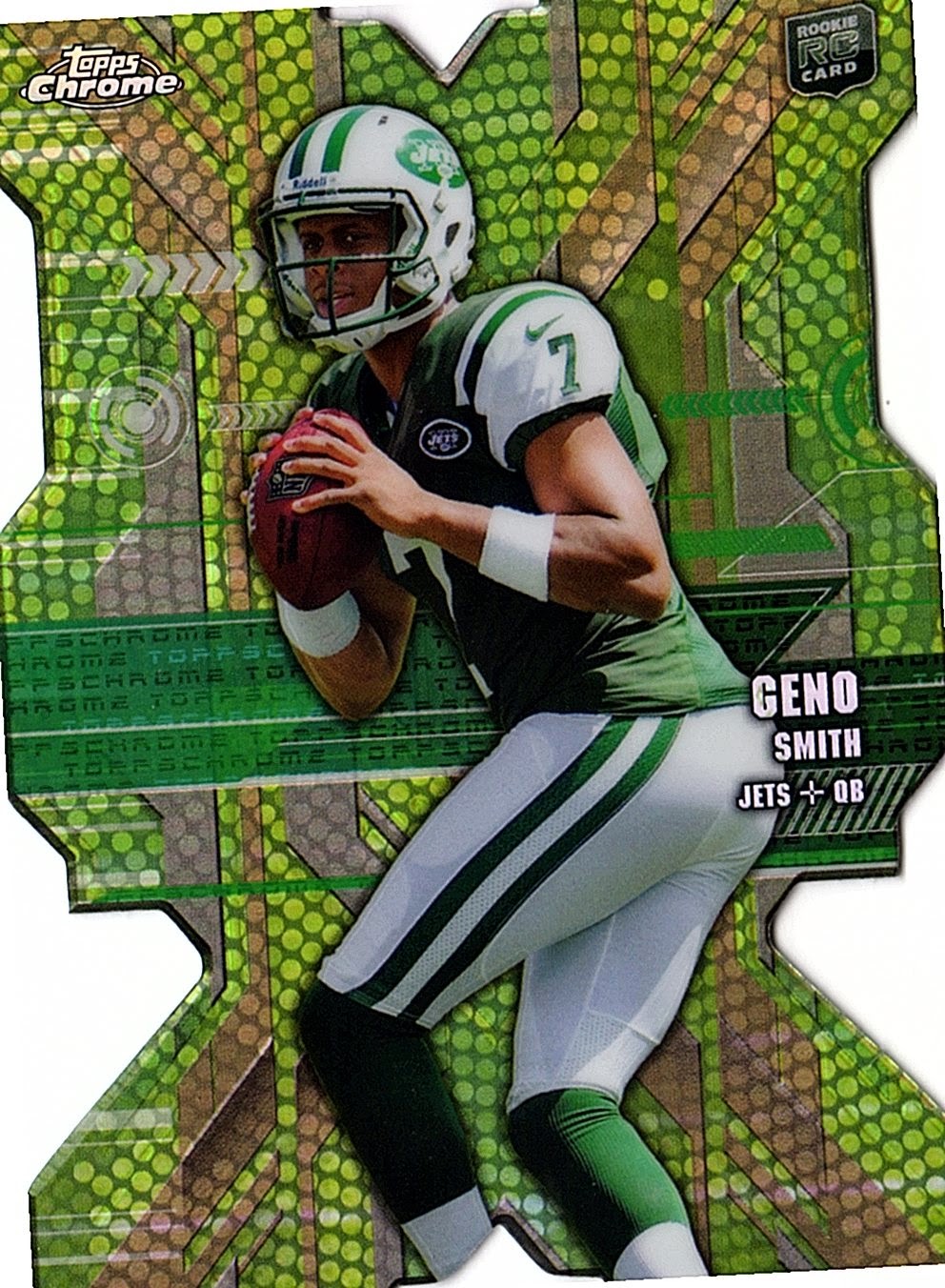 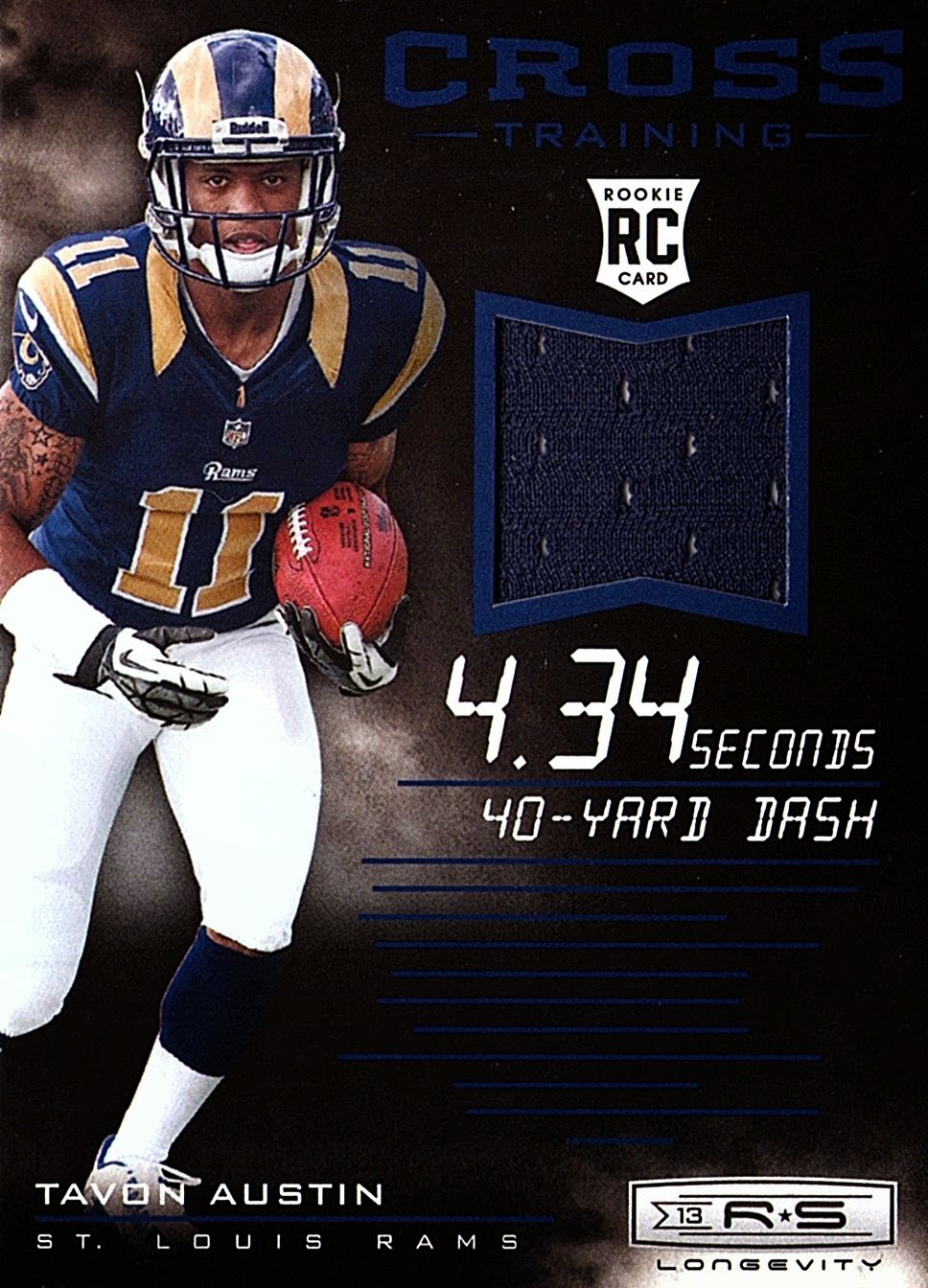 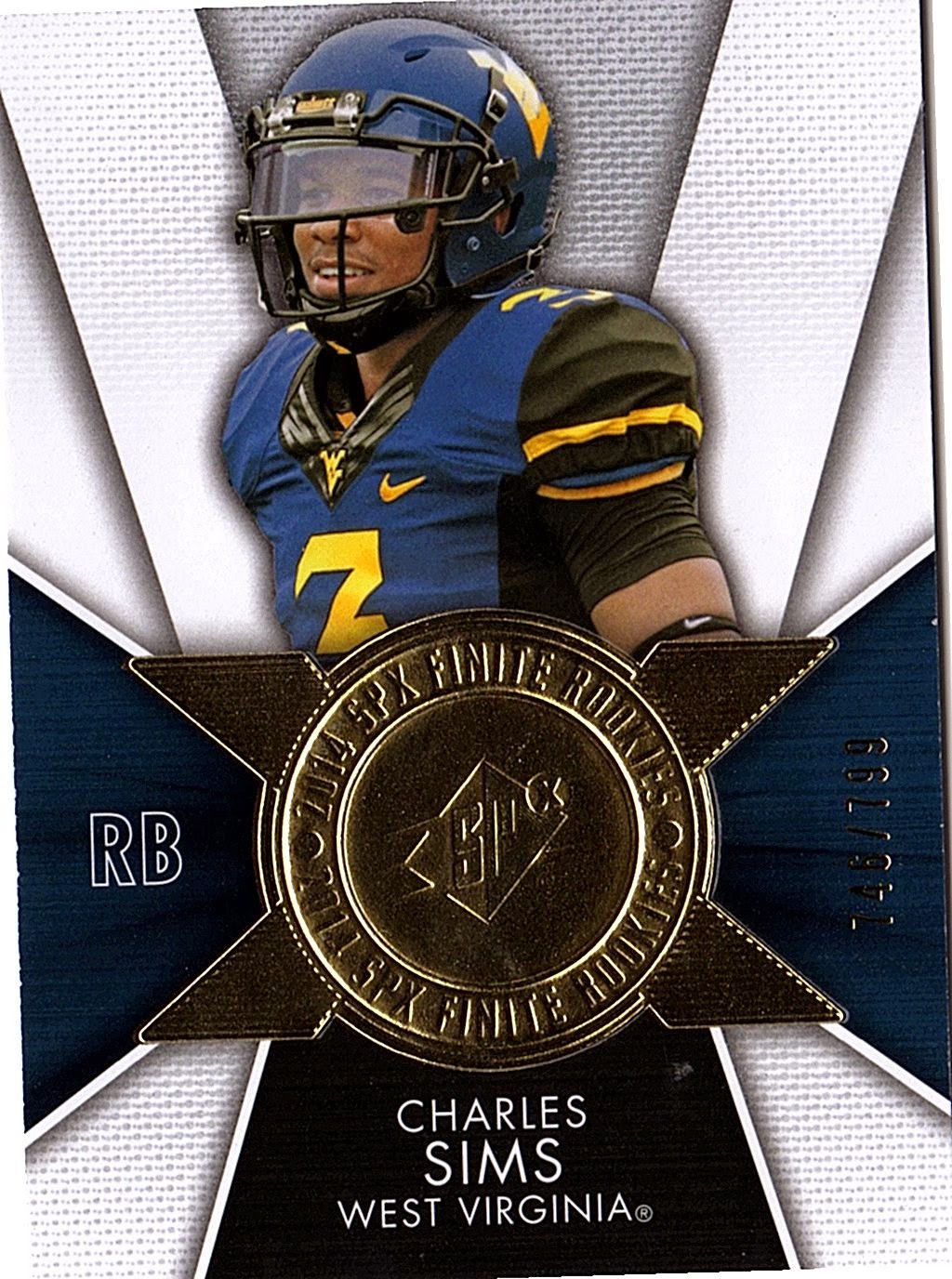 Extra bonus if guys are featured in their WVU uniforms! 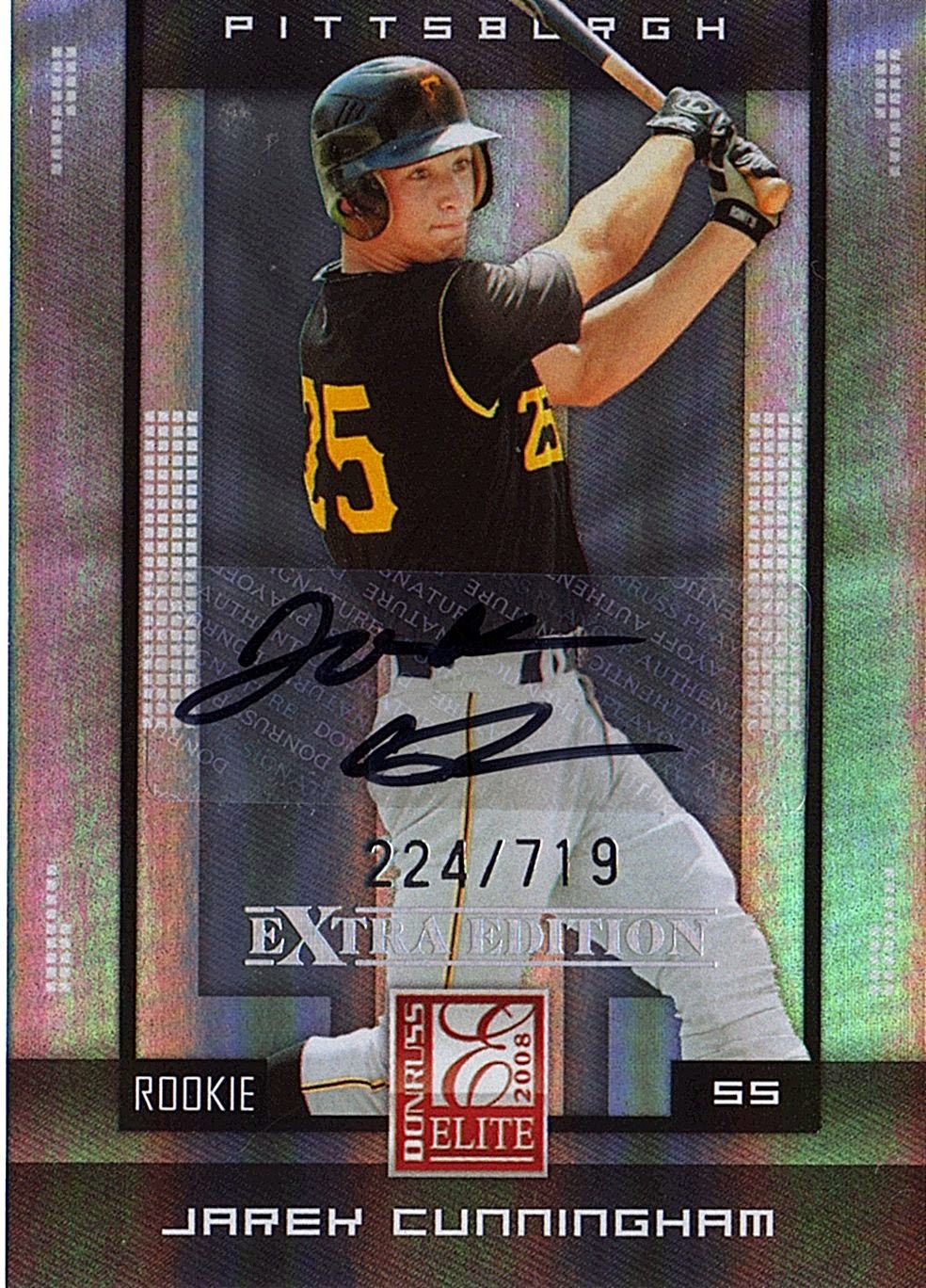 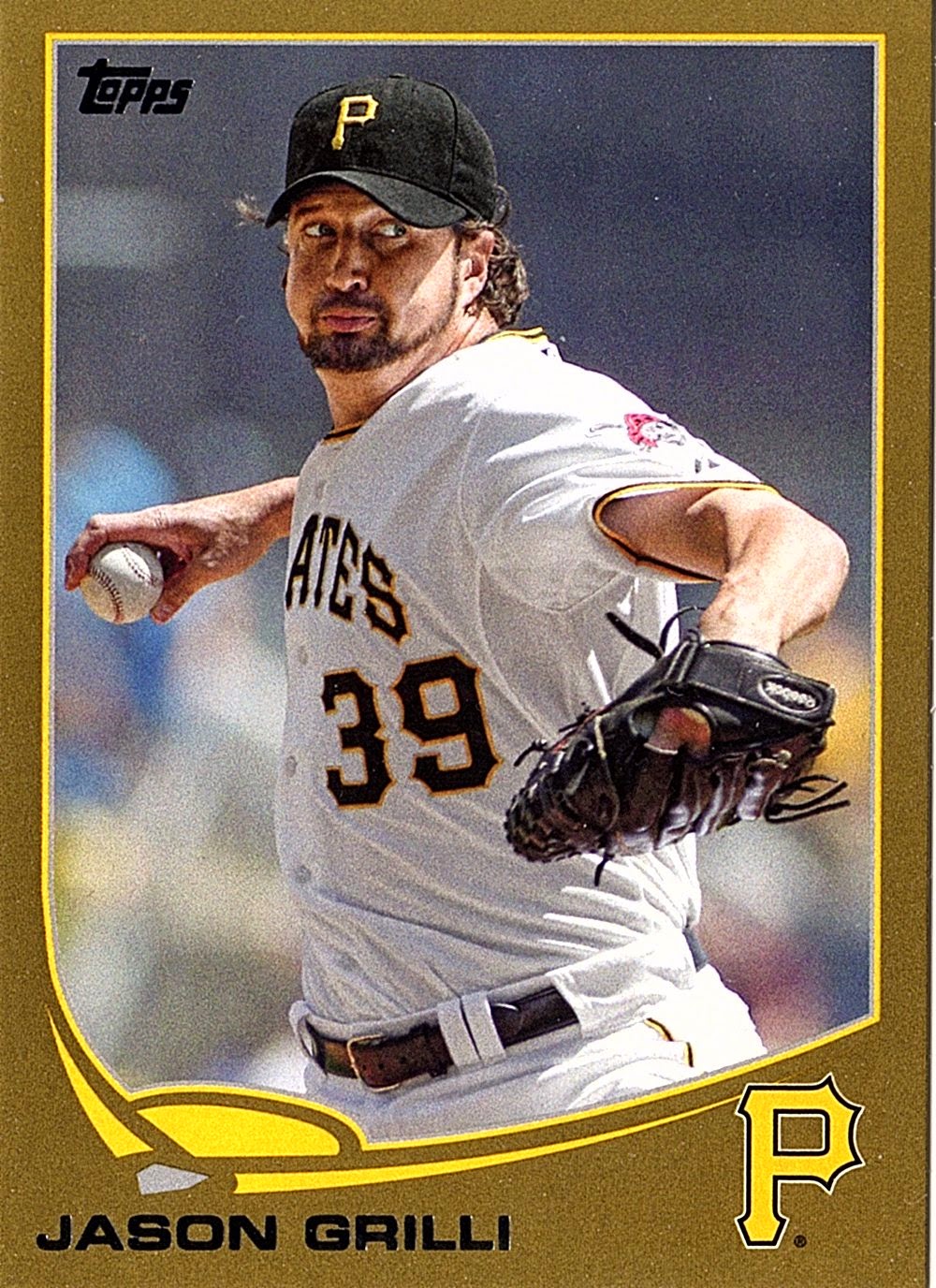 Grilli is off to a nice start with the Braves. The Pirates traded him when he lost some velocity and was blowing saves at a fast pace. When he was off his game he was proned to the homerun ball which caused him to lose favor and his job to Mark Melancon. 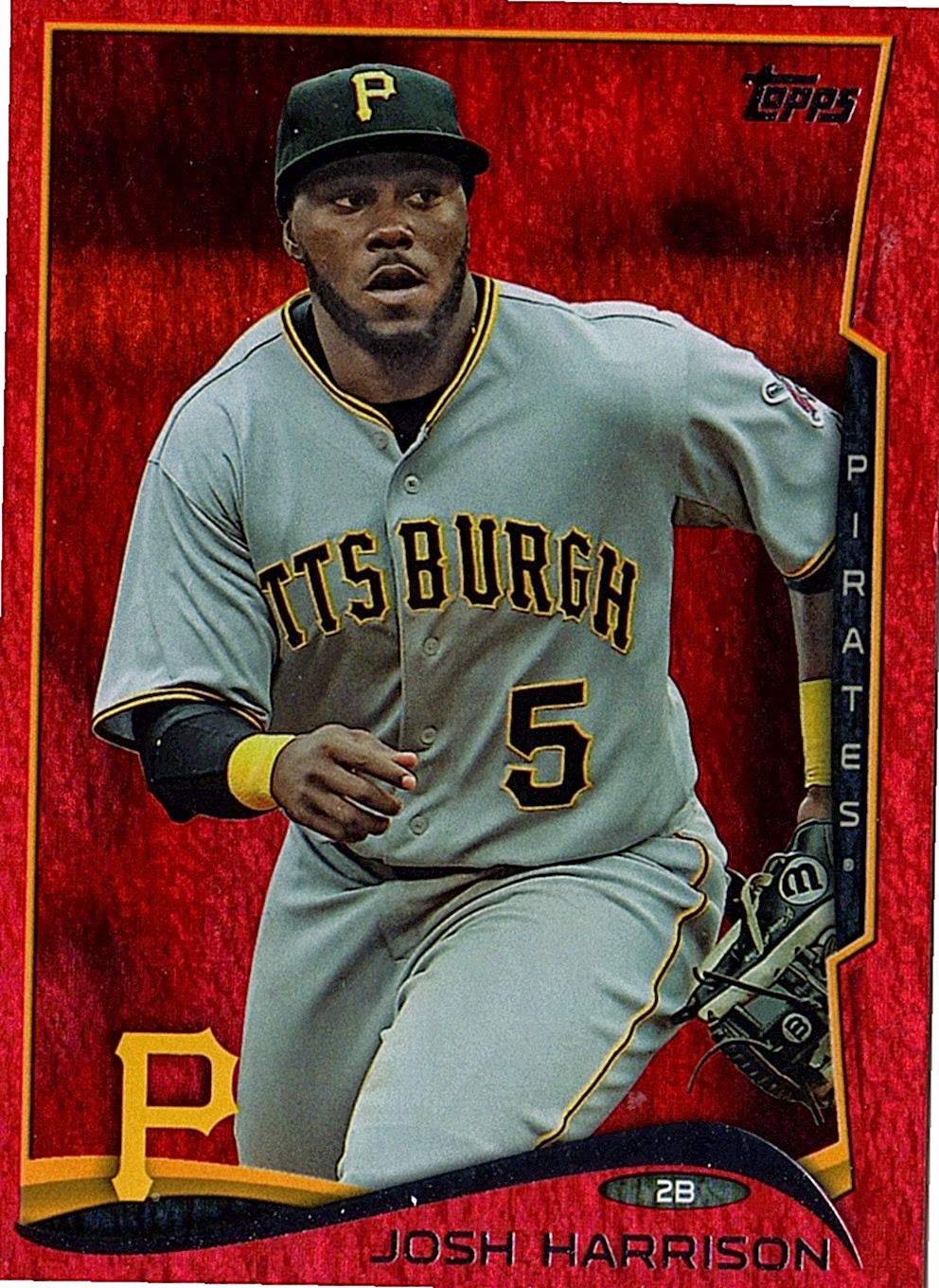 Harrison just signed a new deal with the Pirates that essentially bought out all his arbitration years along with club options for the first couples years of free agency. Seemed like a fair deal for both player and team. Always love getting cards of Harrison as he is just now getting some cardboard love from most releases.

Holy smokes Dennis this was an awesome package! I'll try to find some cool stuff to send your way soon.

Thanks for reading.
Posted by BobWalkthePlank at 1:14 PM